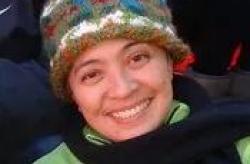 Called “a modern day Florence Nightingale,” and “the epitome of nursing,” by her co-worker, Dorothy Rudert, who submitted the nomination, Balbuena has a reputation for going above and beyond for her patients, and jumping to volunteer for others in times of need – not only at work, but in the rest of her time as well.

Balbuena accepted the award with humility. “I just go there every day and do my work,” she told the Press. “I make sure I take care of my patients and respect their rights.” She also spoke highly of her fellow Shore RNs, saying, “All of us should be nominated because all of us work hard. We work as a group and as a team.”

Four other NYSNA RNs at Shore were among the top 10 nominees: Jewel Cooper, RN, Gina Schlachter, RN, Lauren Micklenburg, RN, and Jamiee Pearce, RN. Click here to read the story in the Press of Atlantic City.