LICH patients, nurses, caregivers, community members, and ​elected leaders came together today to speak out in support of bringing back lifesaving ambulance services to the Cobble Hill emergency room.

"We've been fighting for more than 18 months to save this vital community hospital," said NYSNA member Julie Semente, who worked as an RN at LICH for more than 32 years. "The court has rightfully taken our concerns about NYU, Fortis, and SUNY failing to live up their commitments seriously. We will continue to fight for quality care for our patients." 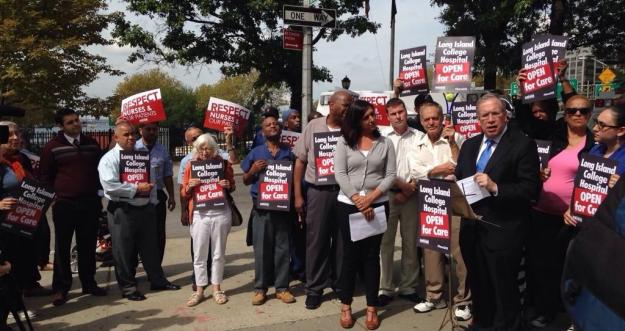 "This is a healthcare issue and a civil rights issue. Brooklyn needs more healthcare, not less," said Comptroller Scott Stringer.

Jo Anne Simon, candidate for New York State Assembly, has been involved in the fight to save Long Island College Hospital from the very beginning.

"As a patient and as a community member, I can tell you that we need this hospital," said Simon.

Carlos Menchaca, council member for Red Hook, has stood by patients from his district who depend on LICH for care. The largest housing project in all of Brooklyn is in Red Hook and the neighborhood was already a federally designated health provider shortage area before LICH was shut down.

"Red Hook residents continue to get sold out by inaction," said Menchaca. "We need conversation and solutions!"

LICH ambulance services were scheduled to return on September 1, but as of today there are still no ambulances bringing patients to the Cobble Hill emergency room.

"LICH needs to be transferred to a team that is dedicated to preserving healthcare in this community," said a representative for congress member Nydia Velazquez.

For nearly two years, a coalition of patients, doctors, caregivers, nurses, community members and elected leaders has fought tirelessly to save Long Island College Hospital. The campaign continues to protect care for the patients served by LICH and throughout Brooklyn. 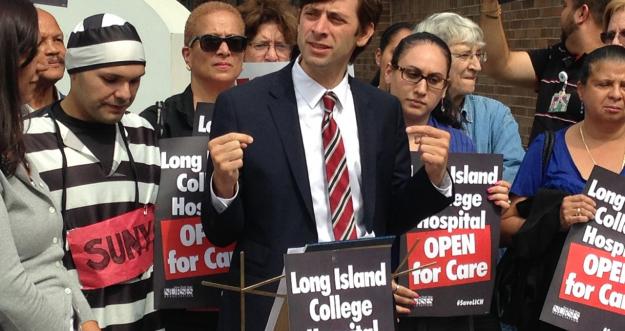 "This is the most impressive community organizing I've ever seen," said Council Member Steve Levin. "We're going to keep up the fight for Brooklyn patients." Last year, Levin was arrested in the struggle to save LICH.

Last year Council Member Stephen Levin was arrested in the struggle to save LICH. Today, he spoke out again in support of our vital community hospital.

"This is the most impressive community organizing I've ever seen," said Levin. "We're going to keep up the fight for Brooklyn patients."

Hospital cuts and closures strain surrounding emergency rooms, increasing wait times, and threatening access to care throughout Brooklyn. Our coalition is continuing to demand the immediate return of lifesaving ambulance services to LICH and for commitments made to the community be upheld to preserve the legacy of excellent care provided by LICH nurses and caregivers.

For further coverage of the speakout, check out these stories: