I have been so honored to lead NYSNA’s medical mission to the Philippines. This is my second NYSNA medical mission and this one was even more fulfilling than the first. It was bittersweet to be helping with the recovery from Typhoon Haiyan from all the way around the world, while back home I was reading reports of the devastation that is to come from Hurricanes Harvey, Irma, and Jose. That is why I thought it was important to give my report of good work that nurses and caregivers will be called upon to perform over the next several months.

We are 14 NY nurses & respiratory therapists, 2 CA nurses and a physical therapists together with 5 physicians and a dentist conducted a medical, surgical and dental medical mission serving over 600 people in 21 barangays (villages) in Basey, Samar on September 9, 2017. The mission was sponsored by Alliance of Health Workers and Health Empowerment in Action for Leyte and Samar (HEALS) in partnership with NYSNA and Filipino American Health Workers Association (FAHWA).

The local union president, Sean Herbert Velchez, explains the situation of nurses and patients in the hospital.

The first day our delegation went to the Philippine Orthopedic Center. The local union president, Sean Herbert Velchez,explained the situation of nurses and patients in the hospital and how they were able to conduct a successful campaign to stop the privatization of their hospital. What was notable is how they provided care despite the government's budget cuts to privatize the hospital.  Still, nurses and caregivers took care of the poorest of the poor. In turn, their patients, their families and the people of the community within the neighborhoods near the hospital joined their "sit-down strikes" - a creative collective action wherein nurses will do sit-downs during lunch. They gained popular support that forced the government to junk the plan to privatize their hospital.

The second day we went to Philippine General Hospital where we discovered that hallway patients are a problem in the Philippines, just like they are back at our med-surge and ER units in hospitals in the Bronx. Here, the cause of this phenomenon is lack of staffing and some of the tactics they’ve used to fight back are petition signing, rallies, and lobbying the Philippine Congress. We also visited the National Center for Mental Health were we discovered that their staffing can go as high as 1 RN to 200+ psychiatric patients! We felt that the patients' conditions are inhumane and the hospital looks like a big compound of prisons. The wards are crowded especially at the male ward.

Day three we flew to Tacloban and day four we visited Eastern Visayas Regional Medical Center (EVRMC), the only tertiary level hospital in the Eastern Visayas region serving several islands. What's interesting is that their situation is better than the hospitals we visited in Manila. Then from Tacloban, Leyte we crossed the famous San Juanico Bridge to Municipality of Basey, Samar Island. We were greeted by the community with delightful children's cultural performances. 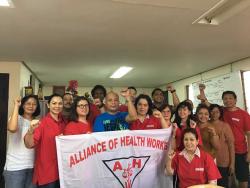 We met with union nurses who stopped the privatization of their hospital.

The next day we conducted our medical mission! Here are some highlights:

Throughout the trip, the one thing that has been proven to me is that nurses and other caregivers, regardless of where they practice, are truly the better angels of our nature.  I look forward to continuing to be of service and to participate in future medical missions where they will be so sorely needed in places like the Caribbean, the Gulf Coast, and Mexico.

Be sure to check out our flicker page for more photos of our trip and watch this video.