Although the 2017 elections were local, the stakes were high throughout New York State. A statewide ballot initiative, along with several high-stakes mayoral and county executive elections, moved NYSNA’s Political Action Team to action.

Throughout the state, nurses hit the phones and the streets to educate fellow nurses, union members and neighbors about the dangers of the proposed Constitutional Convention. We also campaigned for the NYSNA-endorsed candidates who have advocated on behalf of nurses and our patients, and who deserve our support.

We are proud to report that our efforts paid off! The Constitutional Convention was soundly defeated, in large part because of nurses’ and labor’s efforts! Over 83% of voters rejected the proposal, which would have threatened public pensions, our union rights, and so much more.

These are not only victories for individual candidates; these are victories for nurses, who by making our voices heard for the candidates who commit to advocate for us, will be able to call on these elected officials in years to come to fulfill their commitments from the campaign trail. As nurses build our political power, our calls for safe staffing, quality healthcare for all, and our other policy priorities will be too loud to ignore! 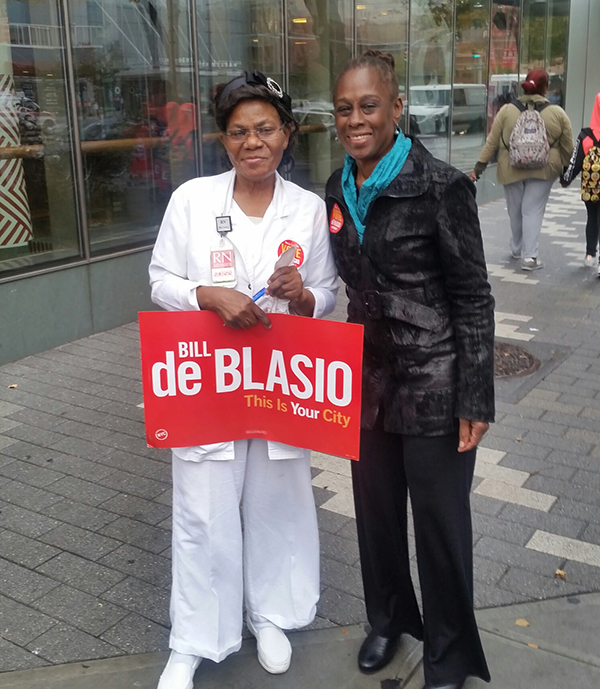 Dozens of nurses around New York State stepped up this Election Year. NYSNA is especially grateful for the work of Ginette Marcharie, RN, who won first place in our member appreciation raffle. Marcharie, who has been a nurse for 20 years, is an active NYSNA member who regularly attends Convention and other events, but this was the first time she got involved in electoral politics.

“When I go to NYSNA conventions, Mayor de Blasio is always there supporting us,” said Marcharie. She continued, “He is speaking out about improving patient care, funding public hospitals, and safe staffing. When NYSNA asked for volunteers, I said yes because I wanted to support him. Not all elected officials are so supportive of nurses or so dedicated to serving the public, so when you find someone who is, it makes sense to work together as a team to help get them elected.”

Ginette Marcharie volunteered on five separate occasions, making phone calls from the NYSNA office in Manhattan, and attending a rally in support of the Mayor later in the afternoon. At first, she thought it would be awkward to call up strangers. She said, “I was surprised that when you call, some people are so pleasant and eager to vote and to volunteer. The Political Action team at NYSNA was so committed and enthusiastic. I loved making calls!”

When asked if she would volunteer the next time there was an important election, Marcharie did not hesitate. “I am excited to get more involved in politics,” she said. “When you’re a nurse, you love people and want to help them. Politicians can see that if you’re out volunteering, it’s because you care. You’re not doing this for more money, but because you want to see people get better, to see patients have insurance, to be an advocate. When nurses are involved in politics, it has more weight. Elected officials are not gods, but they’re important. They are the ones we need to convince that patients will die without insurance, and that a good public healthcare system helps everyone. When you volunteer and help, it’s rewarding—not just for patients, but also for you. It feels good!

To join the Political Action Team, sign up online.