On January 12, 1912, at several textile mills in Lowell, Massachusetts, one of the most important events in the history of the Labor Movement in the United States took place. Twenty-three thousand workers, largely composed of women and children, in response to a sudden cut in pay, went on strike.

The AFL leaders at the time, as well as the bosses, had thought that the workers could never organize.

These women spoke different languages and the bosses worked hard to keep them isolated from one another and divided by ethnicity, language and culture. Outspoken workers were threatened and even brutally removed.

Living conditions were horrendous, workdays were long and nutrition was severely lacking. Even the water inside the mills was contaminated. Average life expectancy for mill workers was 22 years less than the average resident.

These women suddenly found their voice. Breaking from tradition, their participation grew along with their commitment, and they became major strategists and strike leaders. With the handicap of illiteracy among a number of the strikers, song became the language of resistance. Meetings opened and closed with political songs and their beautiful voices echoed in the streets during marches and pickets, as the strike became known as “The Singing Strike.”

After nearly 10 weeks, withstanding lack of food, heating fuel, attacks by state militias and hired mercenaries, the strike ended with a number of key demands won: a raise in pay, overtime pay, and a fairer system for calculating wages.

The Singing Strike generated public support that pressured Congress to hold hearings on child labor and living and working conditions. Ultimately, legislation was passed that addressed a number of these issues. It also inspired workers across the nation to resist complacency in the face of oppression.

The mill owners’ defense of their repressive regimes centered on the rationale that improving conditions would put their businesses at a “competitive disadvantage.” They threatened to move to other states and shut the mills if states imposed regulations favorable to the workers. 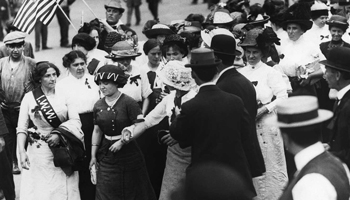 The more things change, the more they stay the same…

While much has changed in 100 years — including the legalization of unions and multiple laws protecting workers’ rights, banning child labor, and addressing unsafe workplaces and housing—the tactics of the bosses and the strategies of successful struggles remain the same.

How many times do we hear: if our hospital improves salaries, benefits or staffing they will no longer be competitive in the cutthroat health care marketplace? How often are we divided by race, ethnicity, geography, age and gender? How safe is our drinking water, thanks to corporate dumping and inadequate infrastructure? How vicious is workplace bullying and repression, even though it may be more subtle and psychological?

Haven’t we learned as well that unity, planning, commitment and courage are the necessary ingredients to successful contract campaigns, unit-wide protests and job actions?

Don’t we understand the importance of building a movement to move legislators to action?

And haven’t we found that our success at the job is inherently linked to the support we receive — and give — to our community?

Don’t be fooled by the rhetoric of a number of our elected officials. There are attempts and actions right now that will bring us back to those days of 100 years ago. So-called “Right to Work” legislation has the ability to potentially destroy Unions as we know them. Environmental protection reversals will make the workplace and our communities unsafe. Laws designed to divide us as a nation by race, religion and ethnicity will disperse our movement for quality care and workplace rights and aim to render us ineffectual. The not-so-subtle attacks against women’s health, in fact, target females specifically in order to further divide us.

Throughout the history of this nation, the action and movement of masses of people — just regular folks like us — have been the backbone of social progress. The reason this article, describing the dynamics of The Singing Strike may be news to many of you, is an example of how effectively those in power rob us of our history.

History is written by kings and queens, generals and conquerors, and those in power. But, in the long run, history is shaped by the rest of us — our actions, our deeds, our bravery, our solidarity and our voices.

Maybe it’s time to raise ours a little bit louder.