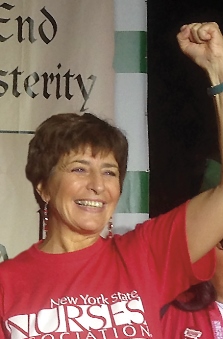 Any nurse will tell you about the bittersweet nature of December. The holidays tend to bring out the best and the worst in people and situations. It’s a time when people shock us with their generosity – or sadden us with the overwhelming depression or tragic events that seem to escalate at this time of year. As nurses, we are often the lifeline for our patients, neighbors, and families when there is no one else. It takes its toll upon us – and yet we continue to be there for people no matter what. I think that this is the tie that binds us to one another, as a community of caregivers; a role we never seem to shed.

The incomprehensible devastation in the Philippines has horrified the world with its wide swath of destruction as the massive Typhoon Haiyan, called Yolanda in the Philippines, finds a place in the growing list of calamities related to climate change. As the corporate Nero’s of today’s world continue to fiddle while Rome burns, greenhouse gases escape into the atmosphere, wreaking havoc with our ecosystems and severely impacting those with the most to lose: the agricultural workers of impoverished nations suffering from storms in Asia and drought in Africa, coastal dwellers from Staten Island to New Orleans, urban dwellers eking out an existence in Haiti. The list goes on and on.

But nurses rise to meet the challenges. As we go to press, at least 250 New York nurses have already volunteered to go on relief missions to the Philippines; many more have donated or raised funds to send colleagues overseas and supplies to the victims. Even absent major disasters, NYSNA nurses often spend a portion of their free time to deliver care or engage in humanitarian work among underserved populations throughout the country and the world – and in our own communities.

Some RN contracts have negotiated language that provides for employer support for relief missions, an indication of how widespread the practice is. The role of the union goes far beyond simple “bread and butter” issues. But there are still many nurses who have not yet won the right for union representation in New York.

Fears of retaliation contribute to the absence of a union presence in many hospitals in our state. The brave nurses of Bellevue Woman’s Center near Schenectady threw that fear on its head in early December when they voted in huge numbers to become the newest members of our NYSNA family. They were outraged when the hospital unilaterally changed the way they deliver care, setting in motion a rallying cry for the protection that only a union can offer. The next hurdle will be negotiating a just contract, a first-time experience for these courageous nurses who have served to inspire us all.

Imagine the influence nurses will have if we build on this win and organize others throughout the state. If organized nurses like us have to fight constantly to defend our rights, think of how hard it must be for the unorganized, forced to deal with unbridled repression on the job every day, lacking the necessary structure and avenues to fight back.

Every grievance won, every bullying manager neutralized, every rally attended, every unit that fights for safe staffing, even every POA filed builds upon our collective strength. Everything that we do makes a difference. We need to celebrate this important truth.Four people were killed – among them RN Kisook Ahn, who had worked at Kings County and Woodhull hospitals and who was on her way home from working nights at the Sunshine Children’s Home and Rehab Center in Ossining – and dozens were injured, in the Metro-North train derailment on December 1. The injured were treated at HHC trauma centers at Jacobi, Lincoln, and Elmhurst, as well as at Columbia-Presbyterian, Montefiore, and other area hospitals. Our hearts go out to everyone affected by this tragic accident.