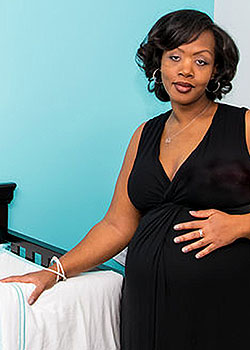 The story of Shalon Irving is shocking.

Thanks to reportage of ProPublica and NPR the demise of this extraordinary African American scientist and mother was brought to the public in late 2017. The underlying facts—and what they say about racism in this country — hold true today, perhaps even more so.

Shalon was an epidemiologist at the Centers for Disease Control and Prevention, the preeminent public health institution in the U.S. Her focus there was on gaining a better understanding of how structural inequality, trauma and violence make people sick.

“The researcher working to eradicate disparities in health access and outcomes had become a symbol of one of the most troublesome health disparities facing black women in the U.S. today, disproportionately high rates of maternal mortality,” wrote the reporting team behind this story. (emphasis mine)

Black women were two to three times more likely to die than white women who had the same condition.

In New York City, black mothers are 12 times more likely to die than white mothers. Their risk of death was seven times higher. Black expectant and new mothers in the U.S. die at about the same rate as women in countries such as Mexico and Uzbekistan, says the W.H.O.

Staying with New York City as an example, black college-educated mothers who gave birth in the City were more likely to suffer severe complications of pregnancy or childbirth than white women who never graduated from high school.

American history texts tell us that these types of disparities were largely blamed on supposed innate susceptibility to illness and unhealthy behavior. “But now,” the authors report, “many social scientists and medical researchers agree, the problem isn’t race but racism.”

There are barriers to care: black women are more likely to be uninsured outside of pregnancy and likely to start prenatal care later. They lose coverage more than others in the postpartum period. The fact that doctors discount black women’s self-reported pain and discomfort (often the result of high blood pressure) plays a role. The authors bear this out: pain is often undertreated in black patients for conditions from appendicitis to cancer.

“But it’s the discrimination that black women experience in the rest of their lives—the double-whammy of race and gender—that may ultimately be the most significant factor in poor maternal outcomes,” write the authors. The stress of being a black woman in American society “can take a significant physical toll during pregnancy and childbirth.” Furthermore, the authors assert that it’s a type of stress from which education and class provide no protection.

Working harder for equal pay; being monitored while shopping at a nice store; stopped by police when in an affluent neighborhood. One academician calls it weathering: continuous stress wearing away at the body. Weathering is a very serious public health crisis. It causes health vulnerabilities and increases susceptibility to infection, and early onset of hypertension and diabetes.

Evidence shows that “weathering” accelerates again at the cellular level. Telomeres (chromosomal markers of aging) of black women in their 40s and 50s appeared 7½ years older on average than those of whites, in a 2010 study.

Weathering can be particularly serious for pregnant women. Stress has been linked to pre-term birth. Black woman are 49% more likely than whites to deliver prematurely (“closely related, black infants are twice as likely as white babies to die before their first birthday”).

For black women, the risks of pregnancy likely start at an earlier age than many clinicians, and women, realize. Clinicians need to take into consideration an added layer of vulnerabilities faced by black women.

Shalon grew up in Portland, OR, in a community of white people. She felt isolated as a child, but she excelled in school at all levels. Landing the CDC job was a plum, although she found the work unfulfilling until a new assignment grabbed her very large intellect.

At 36 she got pregnant, and was ecstatic about it. She was taking medicine for high blood pressure and was dealing with a genetically-linked clotting disorder.

Still, her team of doctors at Emery University in Atlanta took no chances and scheduled a C-section at 37 weeks. African Americans have higher rates of C-section and more than twice as likely are readmitted to the hospital. They suffer from peripartum cardiomyopathy at higher rates than whites. While they suffer from post-partum depression at rates higher than whites, too, their access to mental healthcare is less. No doubt that the birthing experience is much harder on black women than on whites.

Shalon experienced a painful lump on the incision of the C-section a few days after going home with her new born. A hematoma was diagnosed and draining commenced. There were three more visits to the hospital and observations that the incisions was not healing fast enough were tied to her use of blood thinners. But one leg started to swell. “The fact that her symptoms defied easy categorization was all the more reason to be vigilant,” said a doctor who later reviewed the medical records.

Home with friends, she complained of feeling unwell. She stood up, clutched her chest and passed out. At the hospital she was put on life support until her family understood the painful truth: she would never come back. An autopsy indicates death due to complications of high blood pressure. Shalon Irving is a martyr in the fight against the legal killer that is racism.