It was a big win for public health, and for NYSNA, when, after two years of study, New York State put a hold on hydraulic fracturing for natural gas – known as “fracking”. The delay, of at least several years, amounts to a ban for the foreseeable future, as announced by state officials on December 17.

“The evidence in the studies we reviewed raised public health concerns,” acting Department of Health Commissioner Howard Zucker said at a news conference. “Would I live in a community with [fracking] based on the facts I have now? Would I let my child play in a school field nearby?… My answer is no.”

NYSNA has given the environment, especially issues surrounding Climate Change, a very high priority. We marched with hundreds of thousands in September in New York City at the People’s Climate March (see photo above). As nurses, we have a fundamental understanding of how conditions on Earth affect communities and can make people very sick. We can, and do, speak out against those conditions. We must change those conditions.

Fracking is flawed in two fundamental ways. The first involves the way fracking is carried out. A slew of toxic chemicals are used to access natural gas deep in the ground. Where those chemicals ultimately go, and how they are stored, were shown to be very problematic by New York state. Some consideration was given to the very poignant fact that proposed fracking in New York State was adjacent to the Delaware River, the source of drinking water for New York City. It was also adjacent to communities, the places Acting Commissioner Zucker referenced when he spoke of nearby school fields. 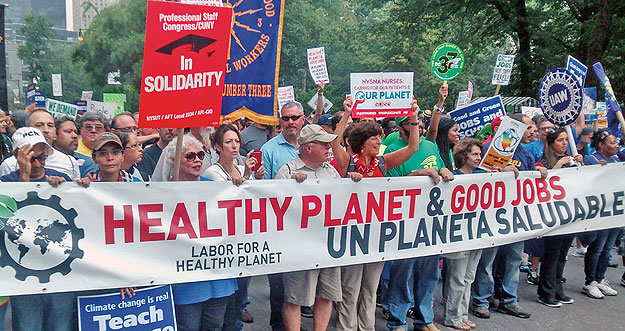 On September 21, an estimated 400,000 rallied in New York City to stop climate change.

The second reason is that, like oil and coal, gas is a non-renewable resource. In order to stop Climate Change – brought about by the excess carbon in the atmosphere – we must move away from burning non-renewable resources. We must do it fast. One study after another shows that we are killing ourselves at a dangerous rate with carbon.

One effect of this assault on the Planet is Extreme Weather Events – like Superstorm Sandy, which resulted in deaths and injury. That massive storm flooded several areas within New York City, including the ground where Coney Island Hospital and Bellevue Hospital Center sit, two facilities in the city’s public hospital system. Power was lost; patients were evacuated on an emergency basis.

For many weeks, our members engaged in outreach to affected communities in Queens, Staten Island and on Long Island, where power was lost and people were cut off. The elderly and disabled were especially vulnerable. Two years later, we remember this disastrous deluge all too well.

Pollution is a killer

Another effect of the reliance on non-renewables is pollution. The fracking process itself is polluting. Beyond this factor, the carbon industry is the major source of air pollution which, in turn, is one of the greatest killers today. One in eight deaths globally is attributable to air pollution each year, according to the most recent data from the World Health Organization.

We won one in New York against an environmental scourge – fracking. But the fight to keep the environment clean, to stop industry pushing non-renewable carbon-spewing fuels, to build an alternative energy future… that fight is still raging.