The spirit of comraderie was strong.

The 2017 NYSNA Convention drew more than 2,000 members over the course the course of two days from around the state who renewed bonds with fellow members and met new ones. The spirit of camaraderie was strong. It was by all accounts an extraordinary gathering where our work as uncompromising patient advocates was reflected in many ways.

We heard from elected officials in New York City endorsed for reelection (see p. 12) and from an group of outstanding labor leaders with whom we have forged alliances on key issues (see p. 13) and stood shoulder to shoulder on picket lines in a number of critical labor battles. All paid tribute to the outstanding role our union has played across the state this year.

The drummers of Batala New York filled the hall with rhythm, as this special global arts project of more than 30 bands from around the world, with instruments and costumes from Salvador, northeastern Brazil, were a powerful, resounding presence. A Patient Defenders Parade pulled together hundreds of nurses and supporters in a festive march through the hall.

Issues and answers filled our workshops

More than 20 workshops were held, with members participating and some with presentations from invited experts, eager to address our members and have a voice in a union that. “Climate Justice: How RNs Can Address the Global Warming Health Crisis,” (see photo, directly below), underscored the growing effects of climate change and our role in stopping it. Recent massive fires, floods and hurricanes, either directly or indirectly tied to man-made climate change, were on the minds of participants.

Workshops addressed understaffing and its hazards, legislative advocacy campaigns, negotiations between RNs and hospital executives, retirement security, working with community allies, and many others. “Defending Our Patients in the City That Never Sleeps,’” was both a tribute to and a sounding board for night nurses (see p. 7).

The Patient Defenders Village, lined with colorful panels created to the theme of superheroes and integrating photos of our nurses from the different regions of our state, welcomed dozens of organizations allied with our causes: from economic justice/labor to environmental justice, immigrant rights and ethnic nurses associations, to disaster relief & recovery, community allies, and political/electoral advocacy groups. The Village was a reflection of our success in our continuing efforts to work with communities and allies.

Our Voting Body filled the final hours of Convention. In a significant action, members voted to amend our bylaws (the constitution of our union) to create a new democratic and transparent decision-making body at the top of our union, the Delegate Convention. Every local bargaining unit and also individual members will elect delegates to the Convention, with one delegate for every 50 members up to 200, and one delegate for every 100 additional members over 200. Diane Groneman, president of our local bargaining unit at Peconic Bay Medical Center, added a proposal to guarantee that the chair or president of each bargaining unit will also automatically be a delegate, and her proposal passed easily. Stay tuned: our first delegate election will happen in 2018.

It was an intensive two days for members and allies. For many, it was considered the outstanding convention of the last five years- a time of growth in membership, excellent new contracts, solidarity among members and allies, and a presence in a movement to make a more equal and just society. “NYNSA’s in the house!”

A salute to brave Utah nurse 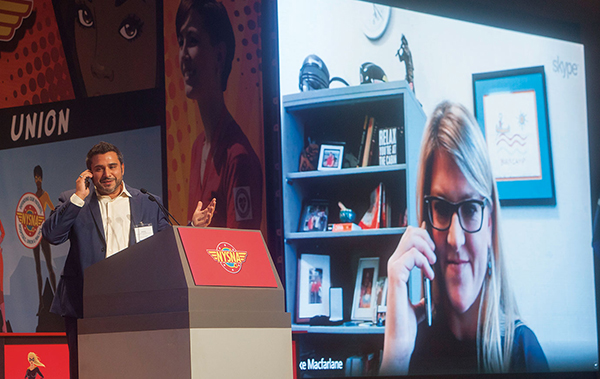 Alex Wubbels, RN, University of Utah Hospital, faced a serious dilemma: would she follow hospital protocols that protected patients, or accede to the improper demands of a local Salt Lake City police officer? Wubbels’ patient was admitted to the hospital’s burn unit after his car was caught up in a chase—not in pursuit of him, but of another man, i.e., her patient was not a suspect. He was unconscious and Detective Jeff Payne demanded that blood be drawn from him.

Wubbels gave Payne a copy of hospital policy which stated clearly that blood could be drawn only with a patient’s permission or by court order, unless the patient was under arrest. Payne cast aside the policy document and handcuffed Wubbels, dragging her from her Unit to a police car. Wubbels was never arrested. Payne was later fired.

Anthony Ciampa, RN and Second Vice President of NYSNA, interviewed Wubbels live via skype during the Convention (photo above). Here’s an excerpt:

AC: So, you showed the police written hospital policy that protected the unconscious patient. Did they pay attention? Did they read it? Did they listen to you?

AW: Clearly, no…. I attempted to show it to the Officer in an effort to help him understand that I was trying to facilitate the right thing.

AC: Has anything like this ever happened to you before?

AW: No. As nurses, we all know what it means when we say “the pucker factor.” I was definitely nervous. I had told the charge nurse in the emergency department that I was scared. But I also knew that it didn’t benefit the situation to show fear…. I tried to do the best I could. Just like any one of us as nurses: we do that every day. Every day we show up at work and we just try to be and do the best we can for the patients. 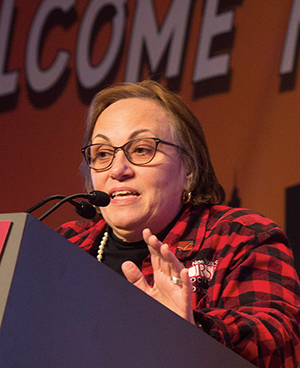 Anne Bové requires no introduction, especially to the people in this room, but I’m going to say one anyway. She is a professor, a nurse leader, a NYSNA champion, a political activist, and a clinical expert.

There is no greater role model for professional nursing and I am so lucky to know Anne as a colleague, mentor, and friend.

As she’s retiring for Bellevue (but not yet, because you’re still on payroll!), it’s only fitting that we recognize Anne formally at this convention.

Anne, from the bottom of my heart, and behalf of everyone here, thank you.

Therefore, I move that the 2017 NYSNA convention honor Anne Bové for her over 40 years of dedicated service to the NY public health system, our patients, and our union.