The NYSNA Convention was a great chance to thank all of the exceptional nurses, organizers, and patient advocates at NYSNA who have made real, positive change happen for their colleagues and communities.

This year’s NYSNA Award winners are:

Solidarity Across Oceans Award: Teresa Schloth, RN
The big dialysis providers cut care to boost their profits. Nurses at Fresenius dialysis centers decided to fight back. Fresenius is based in Germany, so we took the fight there. Teresa traveled to Germany to unite with Fresenius workers there who were on strike. Today, Fresenius nurses have a stronger contract.

“In the Eye of the Storm” Award: Marion Parkins, RN
Marion has dedicated her life to helping people hurt by natural disasters. She attended both of NYSNA’s medical missions this year to Guatemala and the Philippines, and is an exemplary role model.

Outstanding Political and Community Advocate: Flandersia Jones, RN
This year we put everything on the line to save healthcare in this country. Every step of the way, Flandersia was on the front lines—at the Women’s March, talking to candidates who wanted our endorsement, as a Lobby leader for Safe Staffing and the New York Health Act. She is a model of what advocacy should be.

The Case Manager Organizers: Phyllis Beck, RN; Donna Magrone, RN; Melissa DeFazio Furino, RN
One in four workers who try to bring a union to their workplace end up fired. It takes a particularly brave person to organize a union. Phyllis, Donna, and Melissa put their jobs on the line to bring case managers into NYSNA—and they won.

Our advocacy doesn’t stop when we’re not at the bedside. Sometimes we have to take our advocacy to the legislature and to the streets. These exceptional advocates did just that and more:

From the Catskills, Karen Faraci, RN, is a true champion for healthcare for all—especially women and children.

In NYC, Jaiveer Grewal, RN, Carlene Jones, RN and Xenia Greene, RN have taken the lead on building up our union by going unit-to-unit to talk to nurses, recruit leaders, and encourage activism.

In Central New York, Donna Maccarone, RN is building a unified bargaining unit that gets results and connects with the community.

From the Lower Hudson Valley, Anna Marie Perkins, RN has given years of dedicated service to both the Nyack Hospital LBU and NYSNA as a whole.

In Buffalo, Heather Scott, RN works every day to get new nurses involved in our union and help build our power at Erie County Medical Center.

Our public hospitals are under attack, and we have stepped up to defend them. Patricia is one of our most dedicated defenders. When she sees our practice in danger, she stands her ground.

When she sees the mission of our hospitals in danger, she stands her ground. Patricia is dedicated to her family, her patients, and her professional colleagues.

Back in 2012, Westchester Medical Center nurses began a fight that would take years. When management announced apocalyptic staffing cuts and outsourcing, nurses stood strong and, over time, have forced management to improve staffing. This year, they won a strong new contract that achieves some of the highest RN wages in the nation!

Courage Award: Joan Bruce, RN and all the nurses of Bronx-Lebanon Hospital

When a gunman opened fire at Bronx-Lebanon Hospital earlier this year, nurses, doctors and aides rushed in to help. Under fire, they put their lives on the line to save lives. And that’s what they did. Our hearts go out to those who lost a colleague, friend, patient or loved one that day. 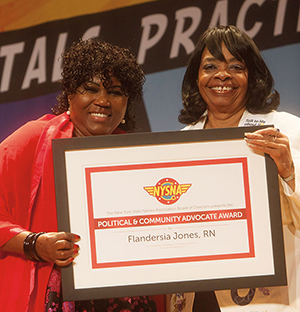