The significance of African American History Month has many meanings for NYSNA. In one sense, we celebrate our very own NYSNA members of African American heritage and their extraordinary contributions to society, both in the delivery of quality healthcare and in our activities that support equal access to quality care and celebrate our cultural diversity. We also see the historic contributions of African American nurses in the making of this nation, a proud and accomplished history with stories of great heroism. These stories still do not have their deserved place in the recounting of our nation’s past and we recognize the importance of telling them as part of the history of nursing.

A time to reflect

Recent events in the U.S., notably in Charlottesville, Virginia, where white supremacists marched through a historic district with the intention of attacking African Americans and promoting symbols of slavery, are a shocking reminder of how a small, but bigoted and hateful segment of society views race relations. These actions serve to heighten the importance of our union using our moral authority — as a trusted voice on community health — during this African American History Month. We can remind New Yorkers and the nation of the contributions of African American nurses and union members to our nation’s history of social progress and diversity.

Labor stood tall with African Americans in protests, then and now

The displays of bigotry in 2017 triggered an outpouring of support for African Americans from a coalition of religious, community, public health and many other Americans, including virtually all of organized labor, NYSNA among them.

The list of support fills volumes, but one significant historic event should be brought forward in every discussion of African American History Month.

The Memphis sanitation strike of February 1968 in Memphis, Tennessee, served as a rallying cry against inequality in the workplace and the deadly conditions that can result. On February 1, two Memphis garbage collectors, Echol Cole and Robert Walker, were crushed to death by a malfunctioning truck. Their deaths were the culmination of a long pattern of neglect and abuse of black employees. On February 11, over 700 attended a union meeting and voted — unanimously — to strike. On the 13th, 1,300 African American men struck outside the Memphis Department of Public Works.

The workers were up against Mayor Henry Loeb, who was determined to fight the union and keep black workers on the job in appalling conditions and low wages. In fact, these sanitation workers earned wages so low that many were on welfare and hundreds relied on food stamps to feed their families (a practice, it should be noted, that had continued — until very recently — at America’s largest employer WalMart, as low wages there forced workers to turn to food stamps to survive).

Support for the Memphis sanitation workers grew. The NAACP passed a resolution in support.

Rev. Martin Luther King Jr. arrived on the scene on March 18, to address a crowd of 25,000 — the largest indoor gathering the civil rights movement had ever seen. Addressing the crowd of labor and civil rights activists and members of the powerful black church, King praised the group’s unity. “You are demonstrating that we can stick together. You are demonstrating that we are all tied in a single garment of destiny, and that if one black person suffers, if one black person is down, we are all down.”

There was chaos surrounding this struggle, as a belligerent mayor and his police resisted a strike settlement.

On April 3, Dr. King returned to Memphis. “We’ve got to give ourselves to this struggle to the end,” he told gatherers. “Nothing would be more tragic than to stop at this point in Memphis. We’ve got to see it through.”

“Like anybody,” he said, “I would like to live a long life — longevity has its place. But I am not concerned about that now.… I’ve seen the Promised Land. I may not get there with you. But I want you to know tonight that we, as a people, will get to the Promised Land.”

This heroic visionary was shot and killed in Memphis the next day, April 4.

On April 8, more than 40,000 people led by his widow and including movement and union leaders marched silently through the city. AFSCME pledged support until “we have justice.”

The union was recognized and a deal was reached on April 16.

It was emblematic: a bitter struggle in an American city with a long history of segregation, a police force culled from the Ku Klux Klan and unfair treatment of African Americans in all aspects of work and life had been met head-on by courageous black strikers, union support, religious and community activism and extraordinary leadership.

That is the labor legacy of African American History all union members remember this month. 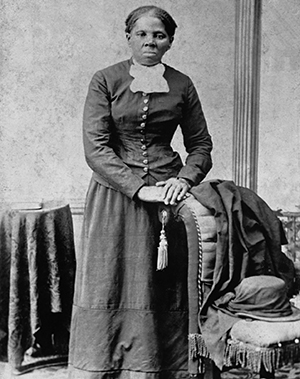 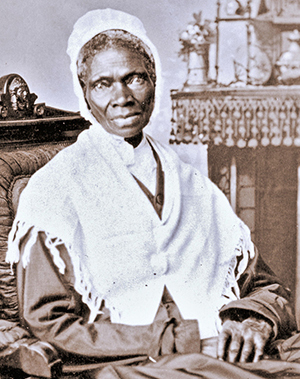 The Civil War was a training ground for African American nurses. Black women born into slavery who became nurses during this time included Sojourner Truth (1791-1883) and Harriet Tubman (1822-1913), both known as abolitionists and the latter for her historic role in the Underground Railroad. Both also took on roles as nurses for soldiers during the Civil War. Susie Baker King Taylor (1848-1912), liberated by Union troops in 1862, turned to nursing sick and wounded soldiers, as well. She went on to become president of the Woman’s Relief Corps, a veteran’s association carried through to civilian life. She is remembered for this quote from her 1902 memoir: “It seems strange how our aversion to seeing suffering is overcome in war, how we are able to see the most sickening sights… with feelings only of sympathy and pity.” 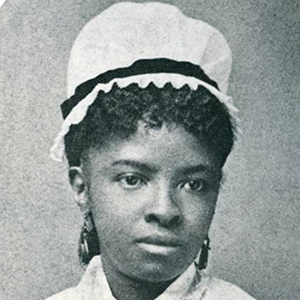 Mary Elizabeth Mahoney (1845-1926) was the first black women to work as a professionally trained nurse in the U.S. She graduated from the nursing program of the New England Hospital for Women and Children in 1905. Mahoney was joined by Adah B. Thoms (1870-1943) and Martha Franklin, RN (1870-1968) in founding the National Association of Colored Graduate Nurses in 1908. Franklin was renowned as a crusader for the integration of black nurses. Thoms spent 18 years as assistant superintendent of nurses and acting director of Lincoln Hospital, but was denied the directorship due to her race. Still, the number of African American nurses doubled between 1910-1930. 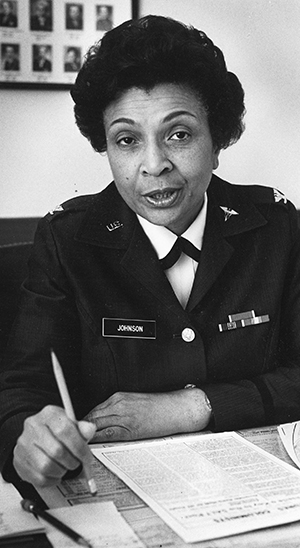 Brig. Gen. Hazel Johnson-Brown, RN, PhD (1928-2011), joined the Army Nurse Corps in 1955 and went on to oversee nursing operations at hundreds of Army medical centers, community hospitals and clinics. The daughter of a tomato grower, Brown was originally rejected for nursing school because of her race. It is said that school authorities informed her, “We’ve never had a black person in our program and we never will.” Brown was the first black woman to become a general in the U.S. Armed Forces.

Serena Williams, a world-renowned tennis champion, endured life-threatening complications after giving birth. She developed pulmonary embolisms but had to advocate vigorously with her healthcare professional team — who initially dismissed her self-assessment — to get the right tests and the right medicine. Further complications ensued: a ruptured C-section wound from coughing due to the embolisms and a hematoma in her abdomen from the blood thinners. She needed six weeks of bedrest even after she was discharged.

Tens of thousands of women face dangerous or life-threatening, pregnancy-related complications each year, but black women are three to four times as likely as white women to die from such complications.

Research is beginning to show that chronic stress from encountering discrimination affects the health of black women of all economic groups — even athletic stars like Ms. Williams. This can be compounded by poor access to pre- and postnatal care, inadequate medical treatment in the years preceding childbirth and the challenge of getting healthcare professionals to take their self-assessments seriously. There is much work to do to achieve equal access to quality care and reduce disparities in health outcomes.

“We have seen some remarkable improvements in death rates for the black population in the past 17 years,” wrote Leandris Liburd, PhD, MPH, MA, associate director of CDC’s Office of Minority Health and Health Equity. “Important gaps are narrowing…. However, we still have a long way to go. Early interventions can lead to longer, healthier lives. In particular, diagnosing and treating the leading diseases that cause death at earlier stages is an important step for saving lives.” NYSNA nurses have made historic contributions to community health and will continue to do so into the future.

African American and other women are now turning to their unions to put a stop to sexual harassment on the job. They know that #MeToo is meant for all women, on every job and in every setting.

A prominent example of African American women, joined by Latina coworkers, was in Chicago where hotel workers represented by UNITE HERE banded together in a movement to stop sexual harassment.

They found that well over half of hotel workers reported harassment from guests; their #HandsOffPantsOn campaign demanded that management equip hotel maids with panic buttons and ban guests who sexually harass a worker.

The collaboration of unions in the civil rights and social justice movements of our day continues, with African American women at the forefront. 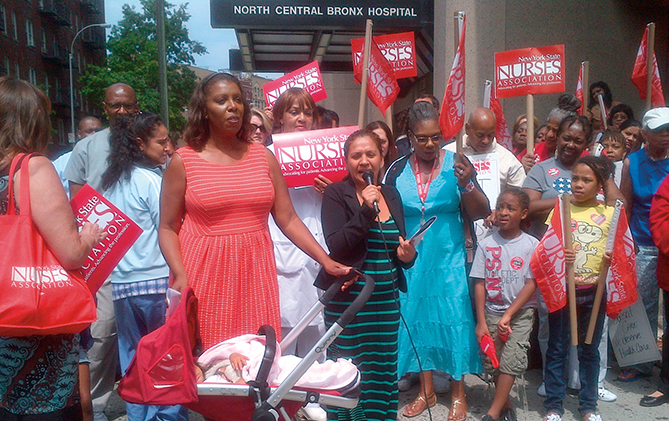 How the Month was launched 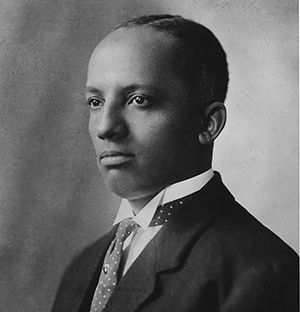 Carter G. Woodson, a Harvard-trained historian, was devoted to raising awareness of the contributions of African Americans to society. He founded the Association for the Study of Negro Life and History and conceived of and announced Negro History Week in 1925. It was first celebrated in February 1926 to coincide with the birthdays of Abraham Lincoln and Frederick Douglass. “The response was overwhelming,” according to the U.S. Department of Labor, “Black history clubs sprang up, teachers demanded materials to instruct their pupils and progressive whites, not simply white scholars and philanthropists, stepped forward to endorse the effort.”