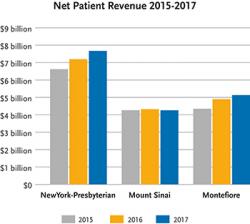 Source: Annual Financial Reports for Montefiore and NewYork-Presbyterian, and the 2017 bond offering for Mount Sinai. Note that Mount Sinai data for 2017 is a projection based on the first nine months of 2017.

Collectively, these three systems made over $16 billion in patient care revenues in 2017. In terms of size, Mount Sinai has more certified bed capacity than NewYork-Presbyterian or Montefiore in New York City. However, as a health system, NewYork-Presbyterian is able to generate more revenues. Overall, these health systems represent 38 percent of the licensed hospital bed capacity in New York City. This concentration of resources allows them to capture a significant portion of the patient care revenues in the city, which contributes to their overall financial strengths as health systems. 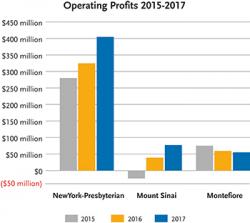 Source: Annual financial reports for Montefiore and NewYork-Presbyterian, and the 2017 bond offering for Mount Sinai. Note that Mount Sinai data for 2017 is a projection based on the first nine months of 2017. 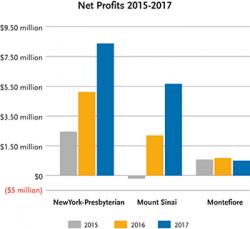 Source: Annual financial reports for Montefiore and NewYork-Presbyterian, and the 2017 bond offering for Mount Sinai. Note that Mount Sinai data for 2017 is a projection based on the first nine months of 2017.

If you consider the full scope of operations of these health systems, their profit margins are only increasing. NewYork-Presbyterian Healthcare System made nearly $850 million in net profits in 2017. Mount Sinai Health System, after completing its acquisition of Continuum Health Partners in 2014-2015, saw its profit margins increase as the size of the health system increased. Mount Sinai Health System recently announced that they are adding South Nassau Communities Hospital to their health system, giving them a foothold in the Long Island market dominated by Northwell Health. Montefiore Health System continues to push north into the Hudson Valley, concentrating on building their presence there. Recently, St. John’s Riverside Hospital announced that it is formally entering negotiations to join Montefiore.

In contrast to the large health systems anchored by three of our largest employers, our smaller community hospitals do not have as large of an individual market share. 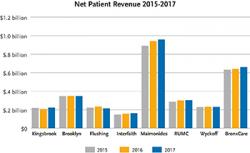 Some of the total revenues for these hospitals are overshadowed by the profits of their larger “competitors” that are a part of an integrated health system. This does not mean that these hospitals are unsuccessful, but it does demonstrate how concentrated hospital care has become. Also, hospitals in New York City have a symbiotic relationship. A recent study focusing on our public sector hospitals found that the larger, wealthier academic medical centers in New York City that anchor the largest health systems are more selective with the patients they treat and attract higher-paying patients as well. This leaves smaller community hospitals and our public health system to bear an outsized responsibility to care for the underserved. A look at inpatient discharges illustrates this point. 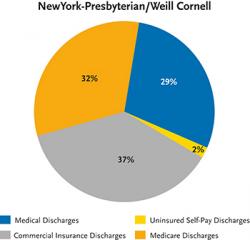 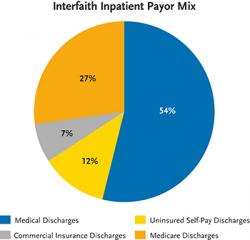 Looking at the inpatient discharges from two hospitals side by side, we can see how stark the differences are in patient population at NewYork-Presbyterian/Weill Cornell Medical Center in Upper Manhattan (part of the NewYork-Presbyterian Health System) and Interfaith Medical Center in Central Brooklyn (part of One Brooklyn Health). The discharge data for Presbyterian shows that nearly 70 percent of its inpatient discharges are patients who have access to commercial health insurance or Medicare. These two payer sources are usually stable and reliable sources of income for hospitals. The patient population is also generally comprised of patients who are older and retired (Medicare) and those who have access to commercial health insurance through their employers or through purchase on the Affordable Care Act exchanges.

In comparison, at Interfaith Medical Center in Brooklyn, 66 percent of its inpatient discharges are patients who are on Medicaid or are self-insured/uninsured. The Medicaid program does not just serve the economically disadvantaged, but a significant portion of Medicaid participants are elderly, disabled, or children. Although Medicaid is considered a reliable payer, its reimbursement rates are generally below cost. Both of these hospitals serve patients in their communities, but hospitals like Interfaith that are smaller and treat our most vulnerable patients are under enormous pressure to join with larger health systems. The creation of One Brooklyn Health was to mitigate some of the challenges these hospitals have faced in the past.