Union sisters from NYSNA, 1199SEIU UHWE, AFSCME DC 37, TWU, CSEA and others marked International Women’s Day on March 13 with a Red Carpet for Social Justice celebrating women’s achievements, culture, and contributions. The program held at 1199SEIU included a dramatic performance by Broadway actress Vinie Burrows; dances, poetry, and songs by union women representing their ethnic and cultural heritages; a keynote speech by Public Advocate Letitia James; and tributes to historic civil rights activists. It concluded with the presentation of the Audrey Smith Campbell Leadership Award, an honor established by 1199SEIU in 2011 in memory of a nursing home worker who died while on a strike line.

The award recognizes extraordinary rank-and-file leadership. NYSNA’s Cheryl Powell was one of three to receive the award this year. Powell's efforts on behalf of Brooklyn’s Long Island College (LICH) and Interfaith Hospitals earned her the distinction of becoming the first non-1199SEIU member to receive the award. Powell, now at Wyckoff Heights Hospital, worked at LICH for 25 years and was on the forefront of the fight that kept the hospital open for more than a year after plans to close it were announced. 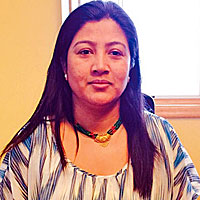 With more than 8 million people displaced, and a death toll now exceeding 7,300, conditions in Nepal in the aftermath of a catastrophic earthquake continue to deteriorate. NYSNA urges members to consider a donation towards relief efforts. Donations are now being accepted through the Nepalese American Nurses Association (NANA), visit nanausa.org. NYSNA also works with the Registered Nurse Response Network (RNRN), whose staff have been closely monitoring and have been in touch with their disaster relief allies as events unfold in Nepal. If you are not already registered as an RNRN volunteer, you may do so online at rnresponsenetwork.org.