At last month’s Convention, NYSNA nurses took part in an extraordinary community action by joining with Saratoga Springs activists and residents, state legislators and environmentalists to protest the transport of crude oil and hazardous fracking chemicals along train tracks that cut through populated areas.

The event marked the two-year anniversary of a train derailment and explosion that killed 47 people and destroyed the business district in the Canadian town of Lac-Mégantic, Quebec, just across the border from Maine. Since then, there has been a record number of oil tanker derailments, explosions, and leakages of dangerous substances into the air and water in the U.S. Yet there is still no uniform national standard for oil train safety procedures, and emergency response training varies widely across the country.

This growing threat demands our continued attention and action.

In November, NYSNA participated in “Oil Train Response 2015,” a conference in Pittsburgh where experts and activists shared strategies on how communities can safeguard themselves from this growing threat to public health and the environment. 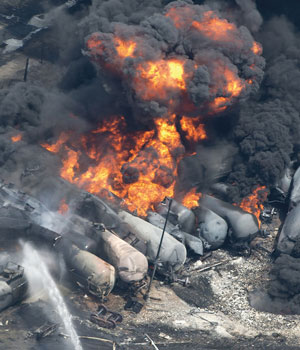 Over the past five years, the volume of so-called “oil trains” has skyrocketed as a result of the oil boom in North America. In the race for profits, producers took shortcuts to get the oil to market as quickly as possible without weighing the hazards of train shipment. Tanker cars that historically carried small volumes of crude oil now are being used to transport large quantities of both oil as well as highly-flammable ethanol and liquid chemicals used in the unconventional natural gas extraction process —  fracking.

In addition, the Bakken crude extracted through fracking, a large portion of North American production, typically contains more butane gas than other kinds of oil, making it more flammable. About two-thirds of North Dakota’s Bakken crude and 10 percent of the nation’s total oil production is now transported by rail. Most of the accidents in recent years, including the Lac-Mégantic derailment, involved trains hauling Bakken crude.

The Association of American Railroads reports that in 2008, the nation’s railways carried 9,500 oil tanker cars; by 2014, there were nearly 500,000 — a fifty-fold increase! This meteoric growth took place without the necessary structural improvement to the rail infrastructure — both aging tracks and tank cars — to safeguard communities and accommodate the risks associated with this dangerous cargo. The 1.15 million gallons spilled in the U.S. in 2013 far outpaced the combined total of 800,000 gallons spilled over the 37 years from 1975 to 2012, according to federal records.

Our nation’s rail infrastructure is aging and in desperate need of upgrades and repairs. Regulatory oversight is weak and there are not enough government inspectors to get the job done. Track problems are compounded by the type of tanker being used.

Far more toxic products, like chlorine, are regularly shipped on trains. But those products are transported in pressurized vessels designed to survive an accident. Crude oil, on the other hand, is shipped in a type of tank car that entered service in 1964 and that has been traditionally used for nonflammable hazardous liquids like liquid fertilizers. Safety officials have warned for more than two decades that these cars were unsuited to carry flammable cargo; their shells can puncture and tear up too easily in a crash. Adding to the problem, many of the fire departments that have had to respond to derailments and explosions are ill prepared to deal with chemical fires and cleanups.

And, of course, there is the matter of climate change. The rising volume of transport of oil by train is an indicator of an increasing reliance on fossil fuels at the very time our national, and planetary, need for carbon emission reduction could not be more compelling.

We welcome Governor Cuomo for his focus on NYS’s environment and the safety of its residents, including state inspections of rail tracks. His ban on fracking and recent rejection of the gas pipeline port off the shore of Long Island, citing environmental and other threats, are steps in the right direction.

We must remind all policy makers that healthcare advocates will remain vigilant about the multiple threats that the transport of oil trains pose to our communities.

UPDATE: NY Attorney General Eric Schneiderman is filing a petition with the federal government to make oil rail shipments safer across the U.S. His proposal would limit vapor pressure linked to tank cars catching fire and exploding. He wants to ensure that “communities in harm's way of oil trains receive the greatest possible protection.” Vapor pressure may have contributed to the powerful explosion and fire after an oil train derailment in Lac-Mégantic, Quebec, killing 47 in 2013.