[The New Jim Crow: Mass Incarceration in the Age of Colorblindness (The New Press, 2011) is a powerful indictment of racism in the criminal justice system by Michelle Alexander, a civil rights attorney, who directed the Racial Justice Project for the American Civil Liberties Union (ACLU) of Northern California, and is a legal scholar and Associate Professor at the Moritz College of Law at Ohio State University and at the Kirwan Institute for the Study of Race and Ethnicity.] 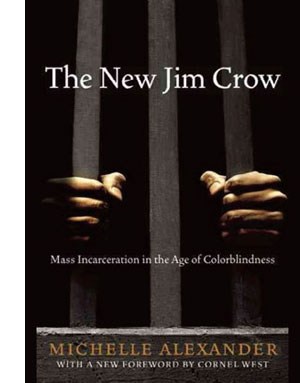 Before the government-sponsored war on drugs, NYSNA nurses fought addiction on the front lines of detox and rehabilitation units at hospitals. They manned the picket lines when hospitals closed those units. And they personally witnessed the devastating impact of government policy on communities of color as funding once allocated for treatment shifted to the criminal justice system — a practice and its frightening consequences that Michelle Alexander lays bare in her provocative book The New Jim Crow: Mass Incarceration in the Age of Colorblindness. “No other country in the world imprisons so many of its racial or ethnic minorities,” writes Alexander. “The United States imprisons a larger percentage of its black population than South Africa at the height of Apartheid.”

In The New Jim Crow, Alexander deconstructs how the country that elected an African-American President (twice) came to imprison 1 out of 14 African-American men, most for drug-related offenses, while only 1 out of 106 white men go to jail. Contrary to the common assumption that this reflects higher drug use and sales in black communities, Alexander reports: “Although the majority of illegal drug users and dealers nationwide are white, three-fourths of all people imprisoned for drug offenses have been black or Latino.”

Resistant at first to comparisons to Jim Crow laws, Alexander uncovers how a racially-coded “War on Drugs,” rooted in the backlash against Civil Rights gains, created a new “Jim Crow” with a system of segregated, second-class citizenship for huge numbers of black men. These black Americans, by virtue of having been incarcerated, are permanently denied the right to vote or serve on juries and barred from employment and also from survival support in housing, food and healthcare — even though racial discrimination is against the law.

Older RNs may remember that the shift from treatment to imprisonment dates back to the 1980s — the beginning of President Ronald Reagan’s “War on Drugs.” At first, many police officers resisted the call to focus on low-level drug users and dealers, instead of violent crime. So Reagan added large financial incentives for local police departments to do so: federal funds and military surplus weapons and equipment were sent to local police but only for Drug Task Forces. And when he authorized police departments to keep 80% of any assets seized from suspected drug users and dealers and their relatives (e.g. money, cars, homes), that sealed the deal for local law enforcement, who became fiscally addicted to the war on drugs.

This war also led to the systematic erosion of civil liberties, with a disproportionate impact on black Americans. In the 1980s and 90s, the Supreme Court ruled that police:

Essentially, the protections under the 4th Amendment to the Constitution have been curtailed in the war on drugs, and racial profiling and other racially-motivated measures bear that out.

Alexander calls this system “mass incarceration” because the total number of Americans in jail or prison (2.3 million) or under supervision on parole or probation (5.1 million) dwarfs the percent of people incarcerated in every other industrialized country. Only Russia comes close.

Alexander hopes that the analysis she provided will awaken the conscience of the nation and help people of good will recognize the gross injustice in the current system. Fortunately, a bi-partisan consensus is emerging against mass incarceration and drug felony discrimination. New York State has refused to disenfranchise felons, the Affordable Care Act makes them eligible for health insurance, and New Jersey has passed a law (signed by Republican Governor Christie) to “Ban the Box” (i.e. barring the “Are you a felon?” question on job applications).

Nurses can do their part, too. NYSNA members have hands-on experience, underscoring that addiction is an illness to be treated, not a crime to be punished. Nurses recognize that drug addiction is a serious problem in our country and know that this illness affects every race, gender and class. It is critical that nurses join the fight to help end the war on drugs.