Harriet Tubman, an African American woman, nurse, former slave, and famed conductor of the underground railroad will replace Andrew Jackson, a slaveholder, on the front of the 20-dollar bill.

Harriet Tubman is most known for her heroic acts to free slaves. She herself was born into slavery and escaped to the north. She then returned to free those she had been forced to leave behind, dedicating her life to ending the inhumane bondage of human beings owned as property in the south.

Over the course of a decade, Tubman led at least 13 raids to free black women and men in the south. She served in the U.S. Army during the war, and in 1863 made history when she led an armed raid by three Union gunboats that freed nearly 800 enslaved people in South Carolina.

But she did not wait for her actions to be sanctioned by the Union Army – even before the Civil War, Tubman worked tirelessly to free slaves from bondage when doing so was still illegal. Southern slaveholders were so irate that they went so far as to offer $40,000 for her capture, an astronomical figure at that time. As Portside reported, “Tubman wasn’t working within the system; she saw clearly that the system couldn’t be reformed or repaired, only broken and replaced.”

In that sense Tubman is truly a revolutionary icon who fought for freedom, putting what was right and moral before the system of chattel slavery which was legal and brutally enforced.

Few people know that Harriet Tubman was also a nurse. She cared for the people she rescued on the underground railroad as she led them to freedom. And later she worked as a nurse for the Union Army, nursing thousands of wounded soldiers, both black and white. She was expert in herbal medicine and was so well known for her ability to cure men of dysentery that she was asked by Army surgeons to use her nursing skills to support troops at a military base in Florida.

Later, on a parcel of land she bought in Auburn, NY, she established the Harriet Tubman Home for Aged and Infirm Negroes.

Sadly, Harriet Tubman was not fully recognized for her important work during her lifetime. The U.S. Government denied her claim for a Civil War pension despite her work as a nurse, spy, and cook for the Army.

Putting Tubman on the 20-dollar bill is a historical commemoration of a black woman freedom fighter and a nurse, and it is a step in the right direction toward cementing her importance in the consciousness of the American people.

Images of women will be also added on the back of both the $10 and the $5 bills. On the back of the $10 bill, the image of the Treasury building will be replaced with one of a 1913 women’s suffrage march along with portraits of five leaders in the movement to win the right to vote for women: Sojourner Truth, Susan B. Anthony, Lucretia Mott, Elizabeth Cady Stanton, and Alice Paul (see sidebar).

On the back of the $5 bill will be an image from the 1939 performance in front of the Lincoln Memorial by the African-American singer Marian Anderson, after she was prohibited from singing at the segregated Constitution Hall. Eleanor Roosevelt and Dr. Martin Luther King, Jr. will also be depicted on the $5 bill.

The currency changes will not be implemented until 2020, the centennial of the 19th Amendment establishing women’s voting rights. 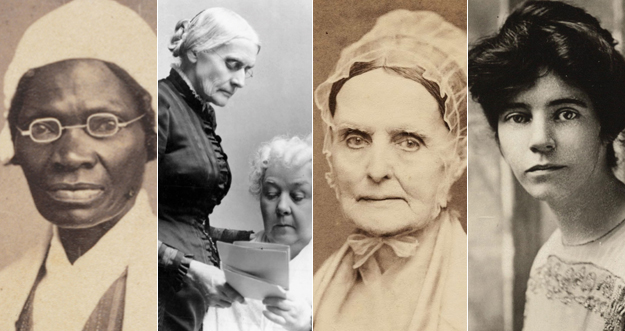