NYSNA nurses stand with the nearly 40,000 women and men on strike since April 13 to save middle class jobs. The strikers are employees of Verizon and members of the Communications Workers of America and the International Brotherhood of Electrical Workers. At the time of publication, the strike had passed its 30-day mark. On May 1, Verizon executives took the unconscionable move of cutting off healthcare benefits for the striking workers and their children.

This is the biggest North American work stoppage since 2011, the last time Verizon employees were forced to strike because their greedy employer wanted to take away the gains that unionized workers had made.

Verizon executives want to move unionized call center jobs offshore to places like Mexico and the Philippines, where they can pay workers as little as $1.78 per hour. They have already offshored 5,000 call center jobs – and if they get their way, they’ll destroy even more jobs here in the U.S. All this at a time when the company is raking in $1.5 billion in profits every month.

Corporate attack on the middle class

Recent Pew research shows that the middle class is shrinking. The middle class is no longer the economic majority in the U.S.A. – more people have been pushed into poverty and the middle class that remains has fallen farther behind upper-income households, which now hold a larger share of the nation’s income than ever before.

If Verizon is allowed to move more good middle class jobs offshore, and force cut backs on the workers here, there would be even fewer opportunities available for U.S. workers to earn a decent living with job security and healthcare benefits. Increasingly, the squeeze on the middle class is forcing workers into low-wage jobs in industries like fast food.

Verizon’s attempt to destroy its unionized workforce is one more case of the corporate attack on labor unions that is killing the middle class. The labor movement built the middle class that exists in America today by fighting for decent working conditions, with good benefits, job security, and livable wages.

As the labor movement in this country declined in the face of corporate attacks, so, too, in tandem did the middle class. According to FiveThirtyEight, in the regions where unions have been weakened the most, the middle class is shrinking the fastest. Meanwhile, unions continue to face attacks from all sides with the nefarious so-called “right to work” campaigns funded by the rightwing billionaire Koch brothers and corporate interests aimed to curb our rights to form unions that protect middle class jobs. Without the labor protections that unions provide, corporations have more power to extract profits for the 1 percent by cutting back on wages and benefits and by moving good jobs to places where CEOs can pay poverty wages.

Verizon’s greed doesn’t stop at cutting benefits and job security for its workers. The company has also failed to invest in America’s future. In The New York Times, Paul Krugman called Verizon the “modern-day robber barons” for refusing to roll out FiOS services and refusing to invest in its own business.

Verizon is under investigation in several states, including New York, Pennsylvania, and New Jersey, for failing to meet its FiOS rollout agreements. In New York City, Verizon committed to bring high-speed broadband to every neighborhood, but low-income communities of color like East Flatbush still lack access to FiOS. Instead of providing services to our communities, Verizon has funneled money into executive compensation, paying its CEO Lowell McAdam $18 million dollars last year alone. Recent studies have shown that most low-income people across the nation still don’t have access to broadband services.

Meanwhile, Verizon has slashed its workforce by nearly 40 percent in the past 10 years, leaving fewer workers to do the job of installing much-needed FiOS.

The workers on strike at Verizon aren’t just fighting for their jobs, they’re also fighting to hold the company accountable for its broken promises to the American public.

We can only win by uniting together

NYSNA nurses know firsthand that we can win campaigns when we unite together with our fellow unions. We know it from the Fight for $15 and Paid Family Leave bills we achieved this year. Unions stood together with the community and we were unstoppable. And we’ve seen the power we have when we unite with our fellow unionized nurses from PEF, CWA, and NYSUT in our fight to win safe staffing. It truly takes solidarity to achieve breakthrough legislation.

Likewise, it will take a united labor movement to fight back against corporate attacks on workers like the one that Verizon is waging right now. We need to stand together with the women and men on strike – the future of the middle class in America depends on it.

Please do not cross the Verizon picket lines, whether at the wireless retail stores in your town or online. We are asking NYSNA nurses to encourage everyone in your community not to buy any Verizon products or sign up for any new Verizon services for the duration of the strike.

And go show our solidarity on the picket line. You can visit StandUpToVerizon.com to find a picket line near you. 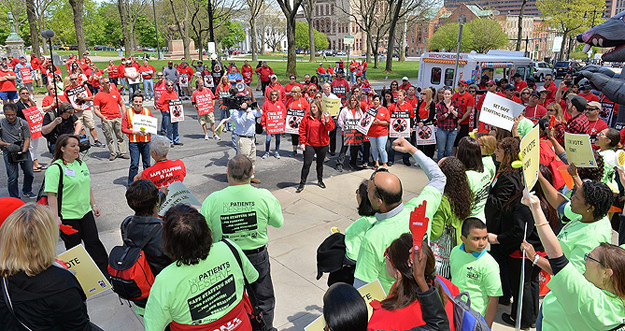 Nurses in Albany for the May 10 Multi-Union Lobby Day cheered on Verizon strikers outside the Capitol.