On May 10, NYSNA nurses joined our Campaign for Patient Safety allies from the Public Employees Federation, the Communication Workers of America, the New York State Union of Teachers, and the New York StateWide Senior Action Council to lobby for the Safe Staffing for Quality Care Act in Albany.

Nearly 2,000 nurses and healthcare activists held an energetic rally and lobbied elected leaders to demand that the legislature bring the safe staffing bill to a “Floor Vote Now!”

The bill has 120 sponsors and strong bi-partisan support in the NYS Assembly and Senate, yet some legislators have held up the bill in committees rather than bring it to a floor vote.

Supportive legislators addressed the crowd and reiterated their commitment to seeing the bill become law. Senator Leroy Comrie (D, 14) said that our campaign is having an impact and he encouraged us to keep up the pressure on legislators: “The Democratic Senate State Caucus supports the bill. Go tell every Senate Republican that you want them to pass this bill. We need Republicans to get on board and stop listening to the myths they hear from the hospital industry.”

The facts are clear

Assemblywoman Aileen Gunther, RN, the bill’s sponsor, said of the hospital industry’s hollow cries to block the safe staffing legislation: “They cried, ‘the sky is falling,’ when we pushed the bill on mandatory overtime. It did not fall. It won’t fall with safe staffing either. We have the evidence from California that shows that both patient outcomes and hospitals’ bottom lines improved following passage of the law.”

Time to make some noise!

Before our rally for safe staffing we took time to show our support for another important fight. Our two-thousand strong contingent joined a protest by Verizon workers on strike to save middle class jobs, chanting, ‘Your Fight! Our Fight!’ ‘Our Fight! Your Fight!’

As we made our way to rally for safe staffing, chants of ‘Floor Vote Now!’ and ‘What’s It’s About? Patient Care!’ rang out.

“I could hear you all the way on the other side of Albany,” Assemblyman Angelo Santabarbara (D, 111) reported when he arrived to the rally. He pointed to the senate offices as he said, “It’s time that those who are not yet supporting this bill hear you, too!”

“Nurses are the backbone of the healthcare system, and without a backbone, the system cannot stand,” said Assemblywoman Addie Russell (D, 116) as she urged legislators to get on board. “We all say we are grateful to nurses for their selfless work. Don’t just say thank you. Make it meaningful in the form of a floor vote this year!”

Legislators and patients spoke out about the care they had received from nurses and the need for more RNs at the bedside to keep patients safe. Assemblywoman Latrice Walker (D, 55) said, “When I was in the hospital, a nurse literally saved my life.”

“I am the brother of a nurse,” said Senator Neil Breslin (D, 44) vowing to do whatever he can to get the bill enacted.

Assemblywoman Alicia Hyndman (D, 29) said her RN mother always put her patients first. “I know from watching her that you give your life, often risking your own health and safety, to care for your patients, and I stand with you.”

Assemblyman Richard Gottfried praised our coalition for its commitment to do whatever it takes to pass safe staffing. “When this bill becomes law, it will not be because of what I did, or what Aileen Gunther did,” said Gottfried. “It will be because of what all of you did to make this happen.”

On a lobby visit to an undecided State Senator whose legislative coordinator said, “the senator is waiting to hear from the hospital,” NYSNA nurses urged the legislator to listen to his constituents rather than hospital executives. Emily Mulenga, an RN at Brooklyn’s Wyckoff Heights Medical Center, said, “Every day a nurse works short-staffed, she has to make an impossible choice between which patient to race to next, when each and every one of our patients needs and deserves attention.”

NYSNA nurses also visited supporters of the bill to thank them, encourage them to put pressure on their less supportive colleagues, and to discuss hurdles to the bill’s passage.

“Hospitals are being penny wise and pound foolish to not support this bill,” Marion Parkins, a nurse at Harlem Hospital, told the staff of Senator Adriano Espaillat, after expressing gratitude for his support of the bill. “Outcomes are proven to be better with more staffing. With better outcomes, there are fewer readmissions and better reimbursement.”

Before leaving the senator’s office, Julia Symborski, an RN at NewYork Presbyterian Hospital, likened the hospital industry’s insistence that there is no need for legislated ratios to “letting the fox guard the henhouse.” 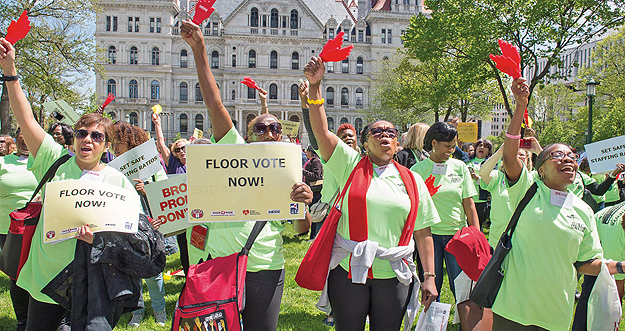 Members did their part to make sure the message of “Floor Vote Now!” was heard by legislators in Albany.