Skip to main content
NYSNA and 1199SEIU at the March 15 Rally in Albany.

All New Yorkers had reason to celebrate on April 4 as Governor Cuomo signed into law the country’s strongest and most comprehensive paid-family leave law and a large raise in the state’s minimum wage. Both were contained in the 2016-2017 state budget.

New York now leads the nation in creating a worker and family friendly economy — and is laying a foundation for better health.

The legislation gained bipartisan support following a campaign by hundreds of thousands of parents, caregivers, business owners, unions, public health advocates, and others. NYSNA members were there with the governor, assuring widespread public support for both issues translated into legislative votes and passage. 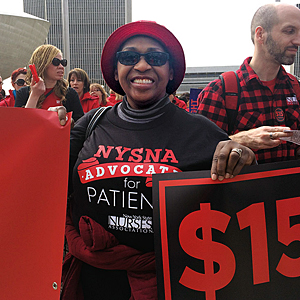 Under the new law, New York’s minimum hourly wage will rise from the current level of $9 to $15 in 2018 for workers in New York City employed by businesses with more than 10 employees; workers elsewhere in the state are to receive a raise as well, but somewhat lower. The plan is to have the entire state at a new rate by the end of 2021.

The rising minimum wage is expected to produce a substantial economic lift for the million-plus New Yorkers who will receive $10,000 annual increase in their income.

A higher wage also means better health. The correlation between poverty and poor health and premature death is well established. The American Journal of Public Health recently published an analysis by NYC Health Commissioner Mary Bassett that found that a $15 minimum wage would have significant health benefits, including lowering the rate of premature death in high poverty communities and saving up to 1,000 lives a year.

Two weeks prior to the April 3 budget deal, NYSNA retiree Lesline Brown-Hazel, RN, was among our union’s contingent at a March 15 rally where thousands of union members, low-wage workers and social justice activists convened at the Empire State Plaza in Albany to deliver a final push to the state legislature to take up Governor Cuomo’s challenge and pass the minimum wage raise.

Ms. Brown-Hazel sees the Fight for $15 as a healthcare issue. “It’s all connected. People can get out of poverty if they earn a decent living. Then they can take care of themselves and their families and not have to worry about whether they can afford food, health insurance, and everything else they need to be healthy.”

She speaks from a personal perspective. “I wasn’t always a nurse. When I started working, I worked for minimum wage. This was the 1970s and I made $3.25/hour. Thirty-five years later, wages are barely double that, even though inflation rose a lot faster. The Fight for $15 is overdue.”

The new family leave law will enable both full- and part-time workers on the job for at least six months to take 12 weeks of paid time off to care for a new child or a sick parent, child, spouse, domestic partner or other family member. It goes into effect in 2018 and comes into full force in 2021.

With 12 weeks leave, New Yorkers will have twice the leave provided in California and New Jersey and triple that of Rhode Island. New York makes no exception for small businesses — all workers are covered. Advocates hope New York’s law will set the standard for paid leave throughout the country.

“By moving to a $15 statewide minimum wage and enacting the strongest paid family leave policy in the nation, New York is showing the way forward on economic justice,” said Governor Cuomo. “These policies will not only lift up the current generation of low-wage workers and their families, but ensure fairness for future generations and enable them to climb the ladder of opportunity. I am proud to sign these programs into law, because they will ensure a stronger, fairer and brighter future for all New Yorkers.”