One Christmas, we nurses decided — as we always do — to celebrate the holiday at work: everyone cooking to make it special, as we spent it with our “work families.” There was a patient who was a victim of a crime. She was one of our favorites, grateful for any small thing and possessing years of experiences and stories to tell. We shared our meal with her and bought her a beautiful shawl which she wore every day until she left the hospital.

“There’s a tough world out there,” she’d say. “You do your best to show kindness, live a moral life. Things don’t always work out the way you wish but you find the humanity in things. It comes back to you.”

That was her way of thanking us for caring for her and caring about her — someone we didn’t really know. She was simply another human being in need whom we could give a little of ourselves to. Nurses “find the humanity in things” every day.

There are other victims in this world, particularly those fleeing war and destruction, drought, starvation, economic collapse, oppression, repression and the accompanying terrors of these situations. Some of these are refugees from other countries seeking salvation from such hardships.

When I hear politicians calling for closing our borders or banning or interning certain people supposedly because of crimes committed by others who share a country of origin, race or religion, I am reminded of the Jewish refugees of WWII who were turned away out of fear; our Government’s internment of Japanese-Americans into concentration camps during that same war; the difficulties Irish immigrants faced after the potato famine; the massacre of Native Americans; and the brutal enslavement of Africans.

However, there is much good to be found, on every scale imaginable! Sometimes the media sensationalizes violence, resulting in a demonization of particular groups. We should always remember that individual acts of violence should not be used to demonize an entire race, religion or group.

When disasters hit, nurses are among the first responders. When a calamity hits a community, we triage our own lives to lend a hand. And there are many others who do the same. There are endless stories that describe the humanity that people exhibit toward one another. These are the things that can give us hope for the future.
While the holidays have passed, we should recall that many people reflect during that time on the birth of Jesus. Technically, Mary and Joseph were “illegal immigrants,” escaping persecution and the possible murder of their unborn child. They were refugees, much like people we see today, escaping their native lands, taking enormous risks to survive and create a safe haven for their children.

Instead of celebrating our nation as a country of immigrants, some politicians nurture fear, promote xenophobia and ultra-nationalist sentiments that only serve to alienate us from one another. For every negative possibility, there are hundreds of positive outcomes that arise from embracing others.

If nurses only focused on negative outcomes we would do our patients and our profession a grave disservice. What allows us to show up for work every day is the thought: “Today, I can make a difference in someone’s life — even against the odds.” 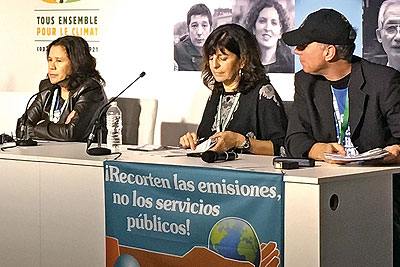 NYSNA President Judy Sheridan-Gonzalez, RN, addresses attendees at a panel organized by Public Services International, at the United Nations Framework Convention on Climate Change in Paris. Writer Naomi Klein, also at the Convention, praised President Gonzalez, “I am humbled to be with you…the New York State Nurses are so kickass.”

I traveled to Paris in December where NYSNA was honored to represent nurses from the U.S. at the United Nations Framework Convention on Climate Change talks that took place. We met thousands of dedicated and amazing people from all over the world who are committed to saving our planet from fossil fuel destruction and linking the need for a sustainable world to the need for measures that sustain the things that allow us to live decent lives, free from war. I can tell you that nurses are universally admired and respected — people trust what we say because of what we do. We were humbled by these sentiments.

The rest of humanity can learn a lot from us. We need to spread that thing that makes us who we are — caregivers, lifesavers, empathizers, and pillars of hope for our patients — to other people and to practice our art outside of the workplace — into our surrounding communities.