Over past months, NYSNA members across New York have been stepping up to the union’s Safe Staffing Captains program, an initiative to document the data on nurse-to-patient ratios for contract enforcement — to make sure that management lives up to our agreements. The program relies on Safe Staffing Captains — member volunteers — to document the data for their shifts by recording daily reports of the real time staffing in their units.

Analysis of the data also will serve as evidence in support of our campaign for passage of the Safe Staffing for Quality Care Act. A comprehensive picture of staffing conditions helps those outside the hospital understand what we observe in our practice.

What follows are profiles of Safe Staffing Captains from each area of the state. Read on, join in and spread the word! Let’s ensure that the program reaches its maximum potential.

Ethel Mathis is an RN in the Special Care/Telemetry unit at Utica’s St. Elizabeth Medical Center. She volunteered because of the near-constant short-staffing throughout the hospital — in her unit in particular. “I see the importance of documenting — recording the information and building the database we need to prove our case.”

She works nights and regularly cares for four patients, regardless of acuity. “The short-staffing isn’t limited to RNs. We’re short on ancillary staff like techs, as well. Many times, my unit has elderly patients who are disoriented or other patients that require constant monitoring. If we have to assign a tech to one of those patients, that’s one less person available to attend to other patients.”

Ms. Mathis knows that documenting the data from her shift is essential and is optimistic that with diligence and wider participation it will become a resource for both negotiations and achieving safe staffing legislation.

Lisa Alleyne-Moore has been an RN at Kings County Hospital in Brooklyn since 2007. Quality care through safe staffing is the highest priority for her and other KCHC nurses. She works in Medical Telemetry on the night shift. Most shifts, her 36-bed unit has 5 RNs and 1 ancillary staff, with 11-12 discharges and up to 12 admissions per day. She often has 7 patients — 5 on telemetry.

Ms. Alleyne-Moore was among the first in her hospital to sign up as a Safe Staffing Captain. As one of the more senior RNs in her unit, she wants “to provide an example of leadership to the hospital’s many young nurses.” With the hospital adding 2 new units, staffing needs are only growing.

She wants more KCHC nurses to get involved so management has real-time data. “There are a few other units that are pretty organized with documenting staffing data, and there are other units that still need to get on board.

Kathy Hoffer is an RN in the Newborn and Special Care Nursery at St. John’s Riverside Hospital in Yonkers. Ms. Hoffer knows her hospital inside and out, having worked there for 26 years; she serves as the current LBU President.

Ms. Hoffer volunteered as a Safe Staffing Captain because she wants management to abide by staffing agreements in their contract. “Three years ago, we negotiated ratios into our contract, but there are still units where staffing is not where it needs to be. We’ve had to be vigilant about monitoring and enforcement. We worked with the Labor Management Committee to develop a process for tracking staffing, but NYSNA’s Staffing Captain system gives us another tool for collecting the data and evidence we need to advocate for our patients.”

St. John’s 350 nurses are preparing to negotiate their next contract and staffing remains a key issue, both at the main campus and at the Dobb’s Ferry’s facility. Ms. Hoffer and fellow RNs want more full-time nurses to fill staffing needs.

Ms. Hoffer is eager to recruit more nurses for the Safe Staffing Captain program; she sees it as “a way to empower individual nurses” on this issue central to quality patient care. 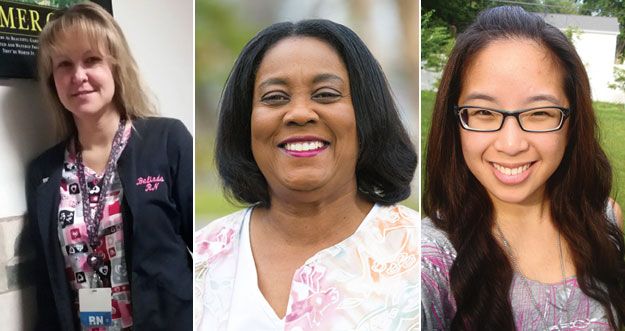 Belinda Carlson, RN, has worked at Brooks Memorial Hospital in Dunkirk since becoming a nurse 7 years ago. As a charge and staff nurse on the hospital’s Med/Surg unit, she’s particularly aware of the critical importance of adequate staffing on patient care. Management has to abide by contractual terms on staffing and the Safe Staffing Captains program is an invaluable enforcement tool.

Ms. Carlson first learned about the Safe Staffing Captain program at a September Inter-regional and immediately volunteered. “Management was asking us to do more with less and blaming the nurses for poor numbers on the HCAHPS surveys. We’ve told them time and time again that if they want to see higher scores, they have to give patients access to a nurse.”

“With the data we record on ratios, we’re hoping to be able to demonstrate the correlation between staffing and patient satisfaction,” she said. Ms. Carlson suspects that when her unit is staffed so that each nurse cares for no more than 6 patients, patients respond more positively on the surveys. “With better staffing, not only are patients safer, and more likely to rate the care they receive better, but nurses are happier and less likely to quit.”

She was pleased to report that other Med/Surg nurses have stepped up and begun documenting data for their shifts. She and her Med/Surg colleagues are working to get nurses in the hospital’s other units involved in the program.
Brooks’ management appears to be getting the message. Ms. Carlson said that staffing in her unit has been better of late and that the hospital has a new group of nurses in training.

When Marie Beauduy of Northwell Health System Franklin’s 24-bed Med/Surg Telemetry unit learned about the Safe Staffing Captain program she jumped at the opportunity to volunteer. “I was excited to participate.” The program is still building at Franklin; not all units are participating but she’s spreading the word and has identified other potential volunteers.

Ms. Beauduy hopes the data that she and the other Franklin nurses record will help enforce staffing agreements at the hospital and support legislation at the state. “Anything we can do to advocate for safer patient care and protect our licenses is worthwhile and should be embraced.”

Eighteen months ago, when Jenny Chen, RN, started working at Ellis Hospital, she was a brand new nurse assigned to the day shift in the hospital’s Cardiac unit. “From the start, patient loads were heavy. We were always filing POAs,” said Ms. Chen. “Safer staffing was a priority in our recent contract negotiations.”

A new contract now includes a commitment from management to hire more full-time nurses, and Ms. Chen volunteered as her unit’s Safe Staffing Captain last fall in order to “do my part to enforce the contract. It’s become part of my routine when I get to the hospital in the morning. I check the census and staff and record them.”

Ms. Chen was particularly encouraged by a presentation at the Capital Inter-regional held on December 8. “When I first learned about the Captains program I thought it would take years to collect the data, so I was pleasantly surprised when I saw charts from my own unit presented at the meeting. It shows that we can use the data to have a more immediate impact than I would have thought possible.” The goal of helping with contract enforcement is already being met. Ms. Chen is encouraging more of her co-workers to sign on as captains so that all Ellis units will take part in the program.