On schedule, a freight train full up with toxic, highly-combustible fracking oil travels through New York State and is loaded on to tankers in Albany. The trains roll through dozens of communities, including Saratoga Springs, the site of our Convention. Hundreds of NYSNA nurses took time on the morning of October 21 to rally at those train tracks and to stand with the community against this horrendous health hazard.

For NYSNA nurses, climate change leads a list public health crises. We deal with the effects of carbon pollution in our hospitals every day. Extreme weather events, like Super Storm Sandy, are a recurring threat.

In Saratoga Springs that threat comes from the transportation of fracking fuel from Canada. 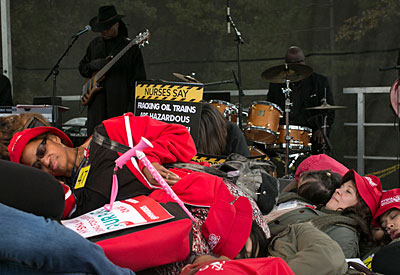 On July 6, 2013, a fracking oil train derailed in downtown Lac-Megantic, Quebec — a town about the size of Saratoga Springs. Multiple tank cars exploded, leveling the downtown, unleashing a toxic fire and killing 47 people. The nearby river was so contaminated by hydrocarbons that drinking water of towns 50 miles away was poisoned.

“We have big oil companies that have decided that it is worth the risk and the price to put our lives in danger by transporting fracking oil by rail in outdated and unsafe rail cars,” Pat Kane, RN and NYSNA Treasurer, told the rally.

To commemorate the loss of lives, a “die-in” was staged with 47 members and staff. It was a solemn moment.

After, members heard from community advocates and concerned politicians in a round of speeches, a powerful display of support and call to action.

“They do it through poor neighborhoods or neighborhoods of color,” said Mark Emanatian, lead organizer of Citizen Action in the Capital Region. Food & Water Watch was there, a leading organization fighting fracking in NYS. Althea Mullarkey, of Scenic Hudson, decried freight with “the volatility of dynamite” transported in tank cars “suitable for orange juice or vegetable oil.” And Jeff Jones, an activist in the community, displayed a map, explaining that “351 schools are within one mile of the tracks these trains travel on.” Organizers from Sustainable Saratoga also spoke.

“We must demand a just transition,” said Pat Kane, “so that workers in the fossil fuel industry, especially our brothers and sisters who have good union jobs in that industry, are able to transition to good jobs that are healthier not only for them but for the entire earth.”

On October 27, Gov. Cuomo announced that inspections of 235 oil tank cars along 195 miles of track had revealed critical defects. This came after the “public outcry over the safety of the trains increased,” press reports stated.