“Wow! Awesome! Amazing!” That was the overwhelming consensus regarding the content, workshops and booths at the NYSNA Convention.

Again, nurses put NYSNA on the map with an outdoor rally and memorial protesting unsafe fracking oil train transport that was reported by state and national media outlets.

The interactive workshops provided “hands-on” learning experiences for members hungry to make changes back home. Some presentations, particularly the one by Dr. Camara Jones, President-elect of the American Public Health Association, were of extremely high intellectual content, but also touched a chord that spurred NYSNA into action — a collective decision to travel to Nanuet with hundreds of members to protest a discriminatory Pennysaver ad by Interim Healthcare: “no Haitians” need apply.

The heart-rending, heroic testimonials during our Young Leaders presentation knocked us off our feet and gave us hope for the future. Nuts and bolts reports by seasoned leaders describing how they achieved victories — as well as how they face serious challenges — illustrated the sophistication of nurses as they navigate the complex waters of the merger and acquisition frenzy.

The fantastic band and DJ — and the dazzling appearance of Sister Sledge — brought us together in the culture of music and dance, illustrating that indeed, “We are Family”. 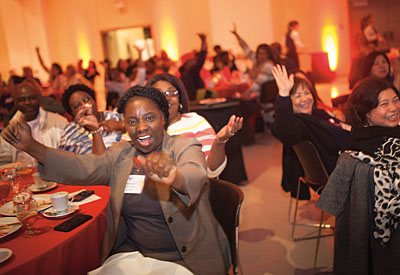 Nevertheless, problems do arise. When 600 or more people get together in one room, full and diverse participation can be enormously difficult. Raising open-ended issues, or concepts without time to reflect and discuss in advance, and then navigating Robert’s Rules in this context can lead to frustration. Having little or no time for open discussion is clearly not an option; however, we must create an environment — and adequate time — for members, whenever we assemble, to raise and discuss issues that matter.

So the question of our structure and functioning arises. When our S-3 Slate was elected four years ago, we inherited an organizational format that was designed by and for a group of elite nurses who were far removed from the bedside. The structure and function of both NYSNA and its Convention, with its internal focus (rules, policies, process, abstractions), impeded our goal to change healthcare delivery and support nurses’ struggles. Attending Convention was like attending a large tea party — only we didn’t have a cup — or even a tea bag.

The Board, while recognizing NYSNA’s structural problems, felt compelled to prioritize the real time needs of members in countering employer and system abuses first. We had no choice but to down-triage the complex task of structural realignment.

Participatory democracy is not a one-time affair. It needs to be an ongoing process that starts at the local level and branches out in an organized, egalitarian fashion. How do we bring members together en masse in a way that facilitates dramatic and inclusive debate? Having a rigid agenda (as mandated by current bylaws) makes this next to impossible.

Some NYSNA structures were invented as afterthoughts to give staff nurses a place to blow off steam (or to manipulate the law): Delegate Assembly, Congress, the Direct Care Provider Unit, the Med-Surg Unit and the initial PFG concept are some examples. Until we changed the bylaws at the May 2012 Javits Center meeting giving power to bedside nurses for the first time, union nurses had no real collective power at all in NYSNA. Now we do.

We welcome your ideas

I want to reiterate that one of our challenges was simply having enough time at Voting Body. We must continually evaluate our structure and rules to make sure members’ voices are heard. We must complete the job begun four years ago and move into the 21st Century.

For now, I want to thank members and staff who participated in this Convention, making it an unforgettable experience. “Play it forward” to your workplaces so that the real on-the-ground work continues — and don’t hesitate to contact us with your ideas and concerns, any time of the year.

To quote one nurse presenter, quoting Ghandi: “Be the change you wish to see in the world.”