When Trish Kuhn, RN, a newly-elected NYSNA board member from Utica, NY, stepped to the podium of the Opening Plenary of Convention 2015 in Saratoga Springs, her voice resonated. “We have felt the unity this year!” she exclaimed. “We are the leading voice to take profit out of healthcare!”

NYSNA President Judy Sheridan-Gonzalez, RN was next to speak. “We insist that all human beings have the right to healthcare, including the right to quality nursing care,” she said. “We advocate for safe housing, decent jobs, child care, elder care and all the things that make our world a better place.” 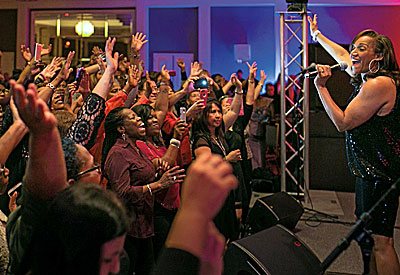 Following her to the fore were nearly a score of speakers, members — some also serving on NYSNA’s Board of Directors — from across the state. Significant contract wins, safe staffing and single payer campaigning, community outreach, young nurse leadership, safety net hospitals, public health in rural counties: these were among the topics presented to a room of 700 nurses.

Anne Bové, RN and President of NYSNA’s HHC/Mayorals Executive Council, spoke to the enduring role of public hospitals and introduced two RNs from Bellevue Hospital Center in Manhattan, Yanick Charles, RN, and Jane Galo, RN. Both had provided care to Ebola patient Dr. Craig Spencer and related their experiences. “It is an inherent and integral trait of a nurse to take care of anybody irregardless of the disease or situation,” said Ms. Galo. “Patient care is the priority and we must just do it! We are called to help humanity with justice, and to act tenderly. Nurses rock!”

In the course of the next two days, members attended clinical and labor education courses: LEAN management, retirement, single payer, POAs. Films were screened on labor issues, including “We Are Wisconsin: Nurses Respond to a Crisis in Labor.” The Convention schedule was full, and opportunities to learn and share were many.

There were important receptions. NYSNA’s Committee on Social & Civil Rights hosted Dr. Camara P. Jones, president-elect of the American Public Health Association and an expert on health disparities and the impact of racism on the health and well-being of the nation. 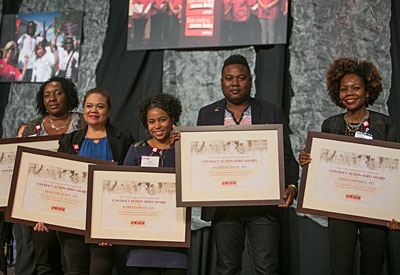 Marie Kelly, CEO of the Ontario Nurses Association — a union of nurses and nursing students headquartered in Toronto, spoke of the tradition of universal care in the Canadian system. She also related her experiences on a picket line during her two decades working for the United Steelworkers Union.

Aileen Gunther, the State Assembly Member from Sullivan and Orange Counties, is an RN and staunch supporter of nursing issues, including The Safe Staffing for Quality Care Act. She was one of many politicians who spoke at the Plenary Panel: “Advancing the Role of Nurses in the Health of Our Communities.” Others included NYS Comptroller Thomas DiNapoli, who handed over a reimbursement check for more than $41,000 to NYSNA (see below), and State Assembly Members Richard Gottfried, Angelo Santabarbara, Shelley Mayer and Al Graf. State Senators Adriano Espaillat and Marc Panepinto also were present to thank NYSNA members for hard work and commitment to patient care and community. Community and political campaign booths gave out literature and signed up many.

An awards ceremony was very moving. Alexandra Robbins, author, who has shown a profound understanding for when NYSNA says, “We Need More Nurses,” was honored with “Nursing in the Public Eye Award.” Awards went to more than a dozen NYSNA members and others for extraordinary commitment to patients, public health and union work.

When it was time to kick off our shoes, members danced to the music of Sister Sledge!

“We Are Family,” sung by Karen Sledge, ushered the room into an evening of music and dance.