Skip to main content
Members from St. Catherine of Siena and Southside Hospital, along with their families, helped Smithtown celebrate its 350th anniversary.

It’s been a busy season for NYSNA members on Long Island. In recent months, LI members were raising funds for charities, marching in parades, and conducting community health outreach, while continuing their ongoing push for safe staffing and fair contracts.

NYSNA’s visibility on Long Island is growing, as members wearing their NYSNA scrubs are making connections that build better patient care and stronger communities. Jenmarie Byrnes, RN, St. Joseph Hospital, Bethpage, explained it this way: “We want our communities to know us, to understand what we’re fighting for, and to support our NYSNA advocacy efforts so that we can have the greatest impact.” Tammy Miller, RN at St. Catherine of Siena Medical Center in Smithtown, said, “Informed community members sign petitions and show other forms of support for our contract and legislative efforts to improve patient care.”

NYSNA members from St. Joseph, St. Catherine of Siena, St. Charles Hospital in Port Jefferson, Southside Hospital in Bay Shore, and Syosset Hospital and their families were front and center at the weeklong celebration marking Smithtown’s 350th anniversary. NYSNA was a sponsor of the festivities, which included a fireworks display on August 19 and a parade on September 26.

NYSNA’s red tent was pitched early in the day as the community awaited the show. Members from St. Joseph, St. Catherine of Siena and Syosset collected signatures on petitions in support of safe staffing legislation. The following week, 30 members from St. Catherine of Siena and Southside, with friends and family, rode and marched along side the NYSNA float. Ms. Miller was among them. “It was great to be involved in the community where I work and to see the crowd be so supportive of nurses. They cheered us on and sent a lot of love our way.”

That same day in Nassau County, members from Franklin Hospital Medical Center and St. Joseph Hospital served as volunteers at the NYSNA-sponsored Valley Stream Community Fest. The NYSNA booth was the fair’s busiest, with six members speaking about safe staffing legislation. They collected 900 signatures in support of the bill. NYS Assembly Member Michaelle Solages was among the many who stopped by to express support.

Giving back to our communities

The group of 150 members from across Long Island raised about $500 for Thiessen. This year’s theme: “Save a life you are a hero; save hundreds of lives you are an RN.” 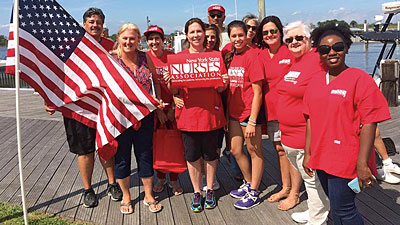 Members at the September 13 Marine Expo.

Long Islanders enjoy access to world-class beaches, but that means they have to be vigilant when it comes to sun exposure. On September 13, NYSNA participated in Assemblyman Joseph Saladino’s annual Marine and Outdoor Recreation Expo at Captree State Park.

The nurses also used the day to talk with the community about the importance of safe staffing at St. Joseph, St. Charles and St. Catherine of Siena and gathered nearly 400 petition signatures in support of safe staffing legislation.