Skip to main content
Two of the many buses carrying hundreds of NYSNA members at the candlelight vigil against racism, outside Interim Healthcare’s offices in Nanuet, NY.

As news of a repugnant, racist reference to Haitian nurses first reached the Convention, members were appalled and disgusted. The racist reference appeared in an advertisement placed by Interim Healthcare and ran in the Pennysaver publication distributed in Rockland County, NY.

“We were outraged by this ad,” said Frantz Descorbeth, RN, a member of Haitian origin who works at Interfaith Medical Center, Brooklyn. “But, the support we received from other members was swift and strong.”

NYSNA immediately issued a statement, made jointly by President Judy Sheridan-Gonzalez, RN, and First Vice President Marva Wade, RN. “When we were informed of the disgusting and alarmingly racist and sexist advertisement… asking no Haitian nurses apply for an agency home healthcare job, many of our members were visibly shocked and saddened.”

News of an investigation of the matter by New York State Attorney General Eric Schneiderman was publicly supported by NYSNA as well.

As the Convention was winding down, however, NYSNA was winding up: a demonstration of support for Haitian members — and against racism and bigotry — was planned during the return trip of members traveling home by bus.

On the evening of October 21, hundreds of members stopped outside the offices of Interim Healthcare in Nanuet, NY — where the offensive ad had been written — to shine a light through bus windows in a candlelight vigil of solidarity with Haitian colleagues.

With a “NYSNA Rolling Over Racism” banner as backdrop, and TV news cameras rolling, three NYSNA members from Haiti descended the buses to speak and answer questions. Mr. Descorbeth was among them. “We are here with our union members to protest this racist ad. All nurses are committed to quality care for all our patients. That’s what we do.”

“There is no place for bigotry, hatred and racism in our state,” said Betty Hyppolite, RN, of Interfaith Medical Center.

‘We care for all’ 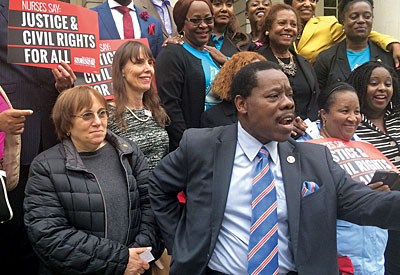 “We care for all. We don’t discriminate against anybody,” Edwige Descorbeth, RN, told the cameras. She works at Kings County Medical Center and Kingsbrook Jewish Medical Center in Brooklyn.

NYSNA Executive Director Jill Furillo, RN, also spoke outside Interim’s offices. “This is a rolling candlelight vigil in protest against this horrible discrimination against nurses and ultimately against patients,” she told the press. “We appreciate the role the Attorney General has played and how swiftly he acted here.”

“On behalf of the 37,000 members of the New York State Nurses Association, we stand with leaders within the Haitian community, elected officials and our brothers and sisters in healthcare to condemn this incident and commit ourselves to fight against injustice in all of its forms.”

“Last night, as hundreds of NYSNA nurses left our state convention, many of us caravaned via coach bus to the offices of Interim Healthcare in Nanuet to show our disdain for their actions. …An attack on one of us is an attack on us all, and NYSNA is here to fight back.”