By 1994, mega-corporation Johnson & Johnson (J&J) capitalized on an opportunity that was to reap its shareholders billions in profits: raw ingredients for opioid painkillers. J&J had bought a business that grew and processed opium poppies in Tasmania, off Australia’s coast. The U.S. Food and Drug Administration approved OxyContin made by Purdue Pharma that year and J&J became the leading supplier of the drug’s ingredients.

J&J developed a special strain of the poppy, which it called “Norman.” This strain became a core painkilling chemical agent, thebaine, in OxyContin—Purdue Pharma’s blockbuster drug. With a sales force of 1,000, Purdue became famous for paying the highest bonuses in the industry, energizing sales reps to hawk the idea that OxyContin was non-addictive.

By 2007, Purdue’s deceptive sales tactics tripped them up and federal authorities took action. Purdue and three top executives pleaded guilty in federal court to criminal charges that they misled regulators, doctors and patients about the drug’s risk of addiction and its potential for abuse. They paid a fine of $600 million. But the charges were reduced to misdemeanors, with no jail time. To drug makers this was perceived as a wrist slap and they “continued its aggressive promotion of the drug, playing down its risk and overselling its benefits,” reported the New York Times.

“I think it would have made a considerable difference if these people had been arrested and done jail time,” Sister Beth Davies told reporters this year. She related her story about the ravages of opioids in Appalachia. In 2001, she and others in Pennington Gap, Virginia, confronted Purdue Pharma executives about the overzealous marketing. Dr. Richard Sackler, the founder’s son, responding to their querries and Sister Beth remembered, “It was always profits over people.”

After years of refusing to share records of drug sales, a federal judge this year ordered the release of seven years of data, exposing the paths of more than 70 billion pills distributed to about 83,000 pharmacies across the country.

One such pharmacy in Clinton County, Kentucky, sold 6.8 million pills between 2006 and 2012. Many pharmacies had annual double-digit growth in pain pills, according to an analysis by the Washington Post. Since 2006, 41 people have died of prescription opioid overdoses in the county. 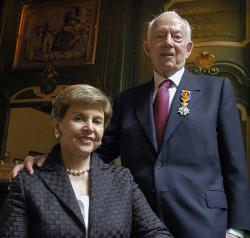 Raymond and Beverly Sackler: He was the last of three brothers who founded Purdue Pharma. All three were MDs. Raymond passed away in 2017 at the age of 97, leaving a multibillion dollar estate.

For some of these pharmacies there is no public record of scrutiny by authorities. The Drug Enforcement Administration had maintained its database for about two decades, “but did not regularly mine the records to identify pharmacies buying unusual quantities of opioid pills,” wrote the Washington Post. The DEA relies on drug companies and pharmacies to monitor and report suspicious purchases. “Letting the industry police itself helped fuel the epidemic” concluded the Post.

“There were just too many people dying from these drugs in such a small place,” said Clinton County Coroner Steve Talbott.

Deceptive sales practices and willing pharmacists and doctors combined to carry out drug sales on a monumental scale nationwide. The opioid epidemic also morphed: it started with prescription pills, which led to increased heroin use and has now spawned the fentanyl crisis.

The Sackler family, meanwhile, established itself as one of the leading philanthropic givers in the U.S. They were celebrated for their multimillion dollar gifts to museums and universities. But that was to come crashing down. 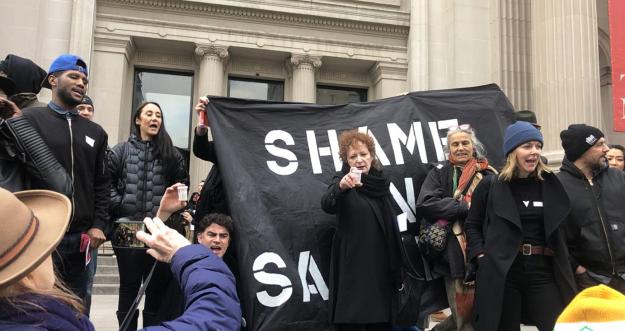 Protesters have gathered in front on the Metropolitan Museum in New York City, where the “Sackler Wing” is located, on several occasions. The family has used profits from OxyContin sales in its philanthropic giving.

On August 26, 2019, a court in Oklahoma issuing a strongly-worded opinion against J&J. (See p. 9 for excerpts.) The company’s practices were found to be a “public nuisance” derived from its harm to the public’s health. Through its subsidiaries, J&J eventually supplied opium-based ingredients for a range of drugs—including hydrocodone, morphine, codeine and buprenorphine. An award of $572 million was handed down. J&J lawyers said they would appeal the ruling.

One indication of J&J’s size and profitability: the award was considered so small that the company’s stock actually rose when news of the ruling was announced.

Still, it triggered a domino effect among other pharmaceutical corporations, as they foresaw major damage awards levied against them and, unlike J&J, had insufficient resources to weather the storm.

The Sackler family’s Purdue Pharma made known its progress toward a settlement worth $12 billion. Others are said to be working with a federal judge in Cleveland on a “global settlement” that could amount to hundreds of billions of dollars. These include Teva Pharmaceutical Industries, Mallinckrodt and Endo International.

In Oklahoma alone, more than 326 million opioid pills were dispensed to state residents in 2015, enough for every person in the state to receive 110 pills, according to court papers.

The interconnectedness of the drug businesses was testified to at the trial.

“There would have been no OxyContin without J&J ramping up in Tasmania,” Dr. Andrew Kolodny of Brandeis University and a plaintiffs’ expert told the New York Times.

Court documents show how J&J sought to persuade doctors that pain was undertreated, training its sales representatives to use “emotional selling” to get across the idea that patients were being harmed by undertreatment. Another concept was “pseudoaddiction,” or the idea that if patients were asking a doctor for higher doses, they were not necessarily addicted but needed more of the drug to treat their pain. 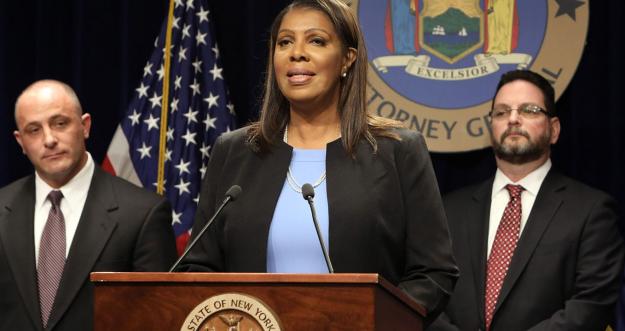 New York Attorney General Letitia James announcing the filing of a lawsuit against the manufacturers of opioids, including the Sackler family, March 28, 2019. She described the suit as the nation's most extensive.

Researchers have repeatedly found that drug marketing can influence the behavior of doctors. And doctors and hospitals were more inclined to trust J&J over other pharmaceutical companies because of its carefully cultivated reputation through decades of careful messaging and product management, experts told the Oklahoma court. No more.

Today, alarms are going off at high volume. “[T]here’s no question that this epidemic began with the rampant overprescribing of those painkillers and that their overuse was fueled, quite deliberately, by the pharmaceutical industry’s efforts,” editorialized the Times. “As innumerable court documents and investigations have shown, opioid makers, including Purdue and Johnson & Johnson, routinely and knowingly misled the public about their products. They played down the risks of addiction, insisting that their drugs were safe and, if anything, underutilized. And they combated growing concerns with aggressive lobbying and public relations campaigns. These tactics contributed to sky-high levels of opioid abuse, addiction and overdose. They led, almost directly, to the street drug problem that the nation is confronting today. And they secured handsome profits for opioid makers and suppliers.”

The crisis has taken an enormous toll on the nation’s economy, costing an estimated $78.5 billion a year in healthcare, lost productivity and involvement by the criminal justice system, according to the Centers for Disease Control and Prevention.

It’s time the drug companies pay it back.

Members like Jenny Adamo, RN, who works Med/Surg and ED on Staten Island at Richmond University Medical Center, see the opioid epidemic up close. She has watched as patients arrive at the hospital strung out on opioids, or worse. 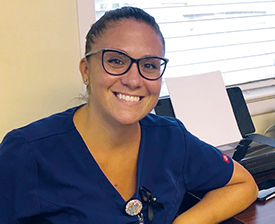 “We are extremely concerned and troubled. It’s a constant. With addiction, people aggressively look for drugs—all types of ‘drug seeking.’ It’s an entire generation of adults reliant on opioids.”“Abuse is common, with the patient not realizing that they are addicted. These are heavy duty drugs.”

In the District Court of Cleveland County, State of Oklahoma vs. Johnson & Johnson

Excerpts from the Oklahoma trial court decision against Johnson & Johnson 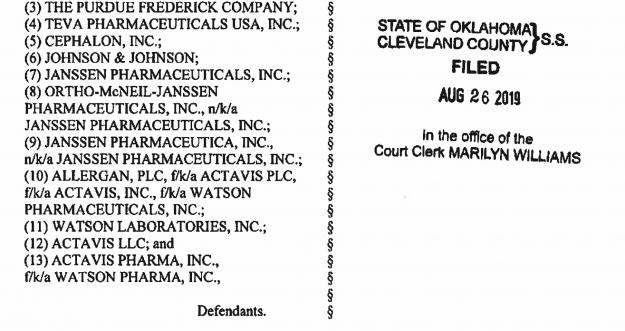 “...supplied to other drug manufacturers”

“‘low risk of abuse and a low danger‘ of prescribing opioids”

“efforts...intended [to] increase profits from opioids.”

“increased opioid prescribing was the solution”