Skip to main content
From Buffalo to NYC’s HHC system, from Massena to Westchester, NYSNA RNs are coming together to stop the attack on public hospitals and our patients. Here, Bellevue RNs sign a petition before a meeting of the HHC Board of Directors.

Public hospitals are in danger: from Buffalo, to Westchester, to New York City's HHC system, officials are seeking to cut care and privatize services.

The New York City Health+Hospitals (NYCH+H) system may be facing the most profound challenge in its 48-year history, as its projected deficit is growing and it faces new threats from Washington. Read the latest report about how NYCH+H can create a restructuring plan that preserves and expands access to quality care for all New Yorkers.

Under Mayor Bloomberg, NYCH+H hospitals privatized laundry, dietary, and cleaning services. In 2012, HHC's Board of Directors voted to outsource outpatient dialyis to a for-profit company. NYSNA's research shows that the NYCH+H dialysis privatization plan and proposed staffing model will lead to patient-to-nurse ratios doubling or even tripling, and nurses' hours per patient cut up to 60 percent! In addition, our research shows that when it comes to patient care, privatization leads to poorer conditions: compared to nonprofit centers, for-profit dialysis results in higher mortality rates (up to 13 percent higher than in a nonprofit) as well as increased hospitalizations and longer hospital stays (up to 17 percent higher than in a nonprofit).

At Westchester Medical Center, administrators laid off hundreds of RNs and caregivers – and then outsourced their work to private, for-profit companies. Watch the video here. 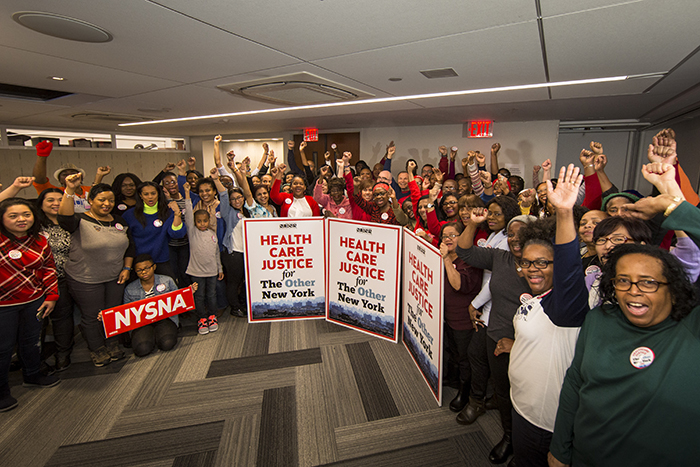 Made up of nurse-leaders from across the HHC system and Mayoral agencies, NYSNA's HHC/Mayorals Executive Council leads our work to defend NYC's public healthcare system.

NYSNA is building a powerful coalition of patients, community leaders, and elected officials to reverse privatization and expand our public hospital system. RNs are making calls, meeting with lawmakers, spreading the word to friends and family, and rallying.

Connect with us to join our movement.

A new documentary looks at the 300-year history of HHC, and the threats we face.

Execs at Westchester Medical Center have laid off and privatized more than 140 skilled registered nurses and hundreds of other caregivers.

Watch the following video of NYSNA nurses talking about what we are doing to save patient care at our county’s flagship public hospital.