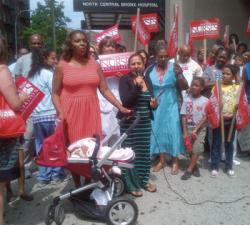 In early August, with only five days’ warning, Mayor Bloomberg shut down a central Bronx Labor and Delivery unit that delivered 1,500 babies last year. City officials did not consult with, or even notify, the community in advance. Families who rely on these services were shocked.

NYSNA responded in force. On August 12, more than 100 RNs from North Central Bronx (NCBH), Montefiore, Jacobi, and Lincoln hospitals, families, and City Council Member Tish James spoke out in front of the hospital, calling on HHC to restore Labor and Delivery at NCBH.

Standing up for public hospitals

“HHC nurses have a contract with the people of New York City to ensure everyone – regardless of background – has access to care,” Anne Bové, president of NYSNA’s HHC Executive Council, told the speak out. “This decision came without reasonable notice or consultation with patients and staff. Politicians just can’t make decisions like this behind closed doors.”

“The shutting down of mother-baby units at NCBH is part of Mayor Bloomberg’s larger attack on all public services in our city and the state assault on healthcare,” said City Council Member Tish James. “It’s time to stand together and demand these services be brought back immediately.”

The closure of two mother-baby units at NCBH leaves only six Bronx hospitals with Labor and Delivery services – that’s a 50 percent reduction for north Bronx.

As the city’s foremost patient advocates, the City Council honored HHC nurses for their heroism during Hurricane Sandy. HHC nurses deserve respect on the job, and families deserve the quality care they provide. Our fight at NCBH is just the latest in this struggle.

NOTE: RNs from the mother-baby units at NCBH are instructed to report to the corresponding units at Jacobi. 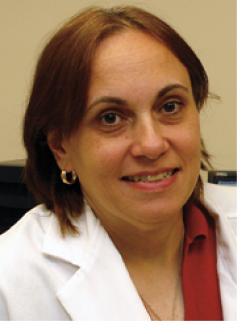 A message from Anne Bové:

No one is ever turned away from our HHC system – the greatest public hospital system in the U.S. But that system and the patients we serve are under attack:

Wall Street wants to take over and wreck our hospitals.

Federal lawmakers are cutting funding for our hospitals.

A billionaire mayor is ignoring patients and nurses.

We are standing up to defend our hospitals and our patients. And like so many times in NYSNA history, HHC and Mayoral nurses are pointing the way forward.

We beat bills in Albany that would have let Wall Street and private equity firms take over our hospitals. We stopped a bill that would have deregulated Certificate of Need, the process that gives patients and the community a voice when administrators want to cut services for “unprofitable patients.”

We’ve challenged the closure of hospitals in Brooklyn, like Interfaith and LICH, and we spoke out at the City Council, calling for a moratorium on all hospital closures in the city because we have seen the impact hospital closures have on our HHC emergency departments.

It wasn’t easy. We made thousands of calls. Hundreds of us visited our lawmakers. But we stopped dangerous changes that would have wrecked our public hospital system.

We showed that together we can defeat the attack on our patients and the mission of HHC. Let’s stand strong together! 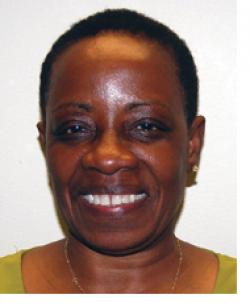 A message from Jackie Gilbert:

Wall Street is not going to give up its attack on our hospitals after just one defeat. Community hospitals are still struggling. And Mayor Bloomberg is stalling on bargaining for all city workers: every single New York City union is working without a contract right now.

We need to make this mayor listen to us. We’re bringing together HHC nurses – and public sector nurses from across the country – for a Public Sector Fightback Conference, Thursday, Sept. 19.

Join us for a day of education, strategy, and action. Talk to your NYSNA delegate or rep to register today.

NYSNA is powered by nurses like you. And we need you like never before. Join us on Sept. 19.

“HHC nurses work very hard to provide care to the communities they serve. When services are taken away from these communities nurses must have a voice. I was there to support HHC nurses at NCB as a NYSNA nurse, patient advocate and NYC resident – that’s our duty.”