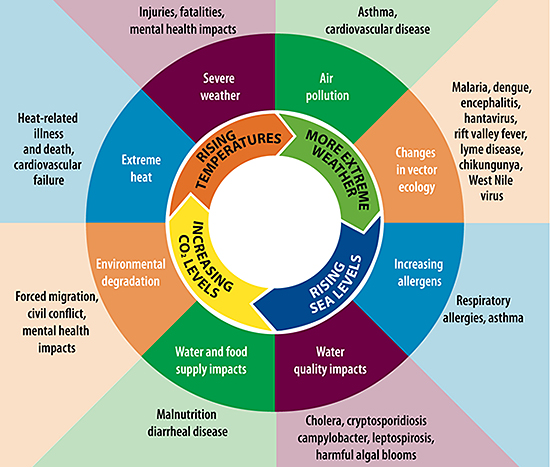 Amid the nine-year anniversary of Hurricane Sandy, and days before the UN Climate Change Conference, Conference of Parties (COP26), in Glasgow we need substantive action from world leaders on the climate emergency. Although parties to the COP will review progress on re-ducing emissions and the effectiveness of overall efforts to address the climate crisis, participants must leave the Oct. 31 through Nov. 12 convening with a plan of action.

Certainly, NYSNA has been monitoring this and other convenings for years. NYSNA represented nurses from the United States at the COP21 in Paris. And we plan to send a representative to COP26 as well. NYSNA Board Secretary Nella Pineda-Marcon will represent the un-ion at COP26.

We know that this convening coincides with increased warnings on the need to take action to address the climate emergency.

For instance, in August 2021, the Intergovernmental Panel on Climate Change issued a report that found that catastrophic temperature warming thresholds of 2 degrees Celsius would be “beyond reach” without dramatic and rapid reductions in greenhouse gas emissions.

In September 2021, leading medical journals from across the world published an editorial noting that the greatest threat to global public health is the climate crisis. They noted that the consequences of inaction would fall disproportionately on communities and countries least responsible for the climate emergency.

For years, scientists have warned that climate change would produce more intense and more frequent weather emergencies. And though we heard this warning, it was insufficient to prepare us for the devastation of hurricanes Maria, Sandy, Ida and others. With each storm and extreme weather event, communities are destroyed with little prospect of complete recovery.

Healthcare workers are uniquely impacted by the climate emergency. We are on the frontlines following natural disasters. We are in com-munity health centers treating vulnerable communities, and we are in hospitals helping patients recover from respiratory illnesses and other ailments with a direct link to the climate crisis. As people who see firsthand the trauma of inaction, we are raising our voices urging action, and action now.

“There is a wide range of human health, safety and mental health threats posed by the impacts of climate change,” said Flandersia Jones, RN. “As a nurse working in the Bronx, I am constantly aware of the many obstacles patients face. The health impacts from climate change and ozone pollution results in significant increases in acute respiratory symptoms, asthma-related emergency room visits, weather-related hospital admissions for infants and the elderly, lost school days and premature deaths. Unfortunately, the marginalized, low-income communities of color are disproportionately hit the hardest. As nurses, we must advocate for change within our workplaces and at all levels of government for healthy public policy including renewable energy options.”

Nurses must be involved as game changers in this pending global catastrophe. Here’s why.“The social determinants of health — the precursors to understanding prevention and care — comprise the major component of our holistic approach to healing,” said Judy Sheridan-González, RN, immediate past president of NYSNA and long-time environmental activist. “Global warming has over-arching effects on all of our communities resulting in such a broad array of illnesses that it simply cannot be ignored: respiratory problems from asthma to emphysema, malnutrition, dehydrating illnesses, injuries, vector-related infections, unclean water micro-organism invasion, cardiovascular complications, mental illness and post-traumatic stress disorder and even forced migration due to extreme weather often resulting in violence and even war.”

The climate crisis is, therefore, one of the most pressing issues of our times. Without urgent action to keep temperature increases below 1.5 degrees Celsius, we can offer neither an upbeat analysis nor assurances that all will be well. All will not be well.

“Scientists are unanimously telling us that our house is on fire and that we have 11 years to change the path we are on,” said Nella Pineda-Marcon, NYSNA board member and chair of NYSNA’s Climate Justice and Disaster Relief Committee. “I don’t know about you, but I trust science! It is unbelievable that there are still people out there saying that climate change is a hoax. It is real, it is bad, and it is only getting worse. But we have the power to turn the tide. It is possible and we know what we need to do to get there. The way we do this is by implementing the Green New Deal. We must get to net zero carbon emissions by 2050. If we do not make significant changes, we will have more and more food shortages, droughts, floods and other extreme weather events. The Green New Deal also includes things beyond cli-mate change. It seeks to fix societal problems like poverty, racial injustice and economic inequity as well. During these unsettling times, we need a bold vision, like the Green New Deal, for the future.”

Even before COP21, NYSNA was urging action. Health care workers not only want to live in a healthy and thriving planet, but nurses under-stand that one-third of heat-related deaths are the result of climate change. Health care workers understand that climate changes means they are not only meeting people at the bedside with infectious diseases but also climate-related illnesses. The climate crisis exacerbates extreme heat, air pollution, respiratory illnesses, lengthened allergy seasons and fertility problems. In fact, the health costs of climate change exceed $820 billion in the U.S.

NYSNA members are more likely to be represented among frontline communities that are disproportionately impacted by climate change but also more likely to experience the health impacts as well. As such, the union has been an active part of the climate change movement since Hurricane Sandy in October 2012. NYSNA doubled down on its involvement following Hurricane Maria in September 2017, when NYSNA created a separate entity, New York Relief Network, to respond to natural disasters.

On the eve of COP26, I caught up with several members to hear their thoughts on what must be done to address the climate crisis.

“We cannot have another convening that is celebrated merely because it is occurring not because it is leading to transformative change,” said Judy Sheridan-Gonzalez, RN. “There can be no celebration as long as the world is held hostage by fossil fuel corporations, billionaires, government heads and those who remain in denial about what must be done to salvage mother earth and to respect its inhabitants.”

“Communities, especially those most impacted by climate change, must have environmental justice, or control over the production and distribution of clean energy,” Sheridan-Gonzalez said.