For several decades, some of America’s elite corporate owners and executives, in common cause with policy institutes established to further their agenda, have been campaigning with all their might — and cash — to bring down unions. They want complete control of the workplaces they own in order to bolster the bottom line: more profits. Some are billionaires, other multimillionaires, and they want more.

Collective bargaining, enshrined in our federal laws in the 1930s, has been the central mechanism to level the playing field in this country. Let workers present their demands for wages, benefits and workplace conditions in a unified way, head to head with corporate management. And it worked for many years.

In this way, unions were able to build the middle class and enable communities to prosper — workers were able to have decent lives and retirements and confidence in the future.

With bold and decisive efforts, however, corporate owners have tried to break down unions. Their goal is to usher in an era of an America without unions. Janus v AFSCME is key to their efforts.

Janus targets public sector workers, invoking a very twisted argument that says everything carried out by a union in the public sector, from firefighters to police to nurses in public hospitals, falls under the First Amendment’s free speech protection. All public sector union activity, the argument goes, should be seen through a filter of “speech” and union member free speech rights supersede union dues requirements.

Simply put, under Janus, public sector union workers have a constitutional right not to pay dues to their union. The “free ride,” whereby a member gets all the benefits of union collective bargaining without paying dues, becomes a federally-protected right.

Beneath this tortured argument is a very simple goal: to bankrupt public sector unions and move on to the private sector, making America a right-to-work nation and making unions a matter of history.

What happened in Wisconsin?

The example of Wisconsin is important to understanding what happens when public unions are attacked. Wisconsin’s Act 10, also known as the Wisconsin Budget Repair Bill, was signed into law in 2011 by Wisconsin Governor Scott Walker and it dealt a crippling blow to hundreds of thousands of public sector workers, hobbling collective bargaining rights and other employee protections. It was also the opening salvo in a national campaign targeting federal employees.

Vice President Mike Pence has made clear that Wisconsin is ground zero for ideas on similar legislation in Washington.

When Act 10 passed in Wisconsin, nurses, social workers, teachers, prison guards, healthcare and other public sector workers in the once proudly pro-union Badger State lost the right to negotiate for their pensions, their health coverage, their safety, their sick leave, their hours and their vacations.

The results have been devastating. By 2014, wages in Wisconsin had dropped by more than 10 percent for most government employees, with some workers reportedly on food stamps. Teacher salaries were frozen in some school districts, the retirement age was pushed back, and health plans were revamped in ways that undercut benefits. Other public sector employees were paying as much as 6 percent more toward their pension and at least 12 percent more toward their health plans. At the same time, in some districts “just cause” for terminations was no longer a part of the deal.

Moving on to the private sector

The Wisconsin State motto is “Forward,”but with wages in decline and without the “fair-share” requirement (Act 10 made union fees optional for public employees who are union members), the future for Wisconsin does not look bright. In 2015, emboldened by his success, Governor Walker took aim at Wisconsin’s private sector unions. Once again, he won, making Wisconsin the 25th state to adopt a right-to-work law.

This was bad news for workers and particularly noteworthy in Wisconsin. Act 10 and right-to-work run counter to the spirit of the state, whose laws and traditions institutionalized two of our nation’s groundbreaking worker protections. In 1932, Wisconsin was the first state to found a union local: (Local 1) of the American Federation of State County and Municipal Employees. Twenty-seven years later, in 1959, Wisconsin was front and center again with the first law in the country to allow public sector unions to negotiate contracts. In 2011, that hard-won right virtually disappeared with a stroke of the governor’s pen, along with all the worker protections and benefits it safeguarded.

Union membership is on the rise among young people for the first time in decades. According to the Economic Policy Institute, in 2017, there were 262,000 new union members in the United States. Of this number, 75 percent were young people (aged 34 or under). Young people are now reported to have the most favorable attitudes toward labor of any generation and their support for political parties skews heavily toward those that support pro-worker policies, specifically opposing right-to-work laws.

New AN ACT to amend the civil service law, the general municipal law and the state finance law, in relation to union dues and the duty of fair representation

Successful legislative changes to the state’s Taylor Law that help our public employee union rights were signed into law by Andrew Governor Cuomo on April 12, 2018.

Some of the highlights: 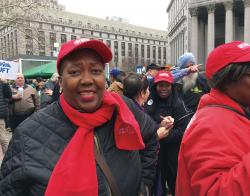 Among the many benefits that union organizing and actions are responsible for:

The power to advocate for our patients

“We can stand up together here in New York and make a difference. We have a powerful voice.”

“As a professional critical care nurse, being in a union allows me to be the voice for patients not only that I personally care for, but also the advocate for patients in hospitals throughout the state! I refuse to sit back on the sidelines while irresponsible decisions are made by people who could care less about my patients. And knowing that 42,000 nurses in NYSNA agree with me, gives me hope, courage and strength.”

“Being in a union makes you feel like people are behind you. Nurses are the patient advocates. We’re the front line of care. We deserve a union that will hold our standards high. In no other profession do you have to be everything to everybody. Nurses make sure our staff and patients and environment are safe. It’s a big responsibility. Sometimes we have to fight for basic things like good computers and the equipment to help us do our jobs. Thank god NYSNA has helped. I’ve been here 33 years. I could never have survived without NYSNA. You owe it to yourself to pay your dues.”

“It’s important that nurses and everyone in the union movement understand the importance of solidarity. We need to encourage unions in this country. Unions are the reason we have the benefits we have, and even people who are non-unionized have benefited from unions. Unions are the reason we have rights like minimum wage and family leave. We need to make sure our rights are maintained and enhanced. The only way to do that is to strengthen and support the union movement.”

“As an RN, it’s important to be educated about the challenges our profession faces, as well as the challenges our patients face in accessing and affording healthcare. It’s inhumane to make people pay outrageous amounts of money for the basic right to healthcare. Our patients, many of whom are already disadvantaged, may not seek care because of these political decisions. Our jobs could be dramatically changed because of these political decisions. Nurses being educated about what’s going on and advocating will make us a more powerful force—both for ourselves as nurses and for our patients.”

"I work very hard and I know that if we don’t have a union, we won’t have anyone to fight for us. If people don’t want to contribute dues, eventually the union won’t exist. Then who will we turn to when we need support? Keeping your job and your respect is more important than saving a couple of dollars each paycheck.”