Montefiore picked the wrong fight with the two satellite hospitals it bought in a merger.

At New Rochelle, nurses point to an understaffed Labor & Delivery Unit, where mothers with newborns are forced to recuperate outside the maternal child department. Newborns were involuntarily separated from mothers. RNs spoke up and rallied with the community and the practice was stopped—though not entirely.

Today, nurses are asking for higher tuition reimbursement. They say school is needed to be able to keep up with the ever-demanding developments in healthcare. They want retiree health benefits so that all nurses can retire at age 60 with benefits to tide them over until Medicare age. Understaffing remains a critical issue. Nurses formed a picket on November 19, telling the press: ENOUGH IS ENOUGH! Registered nurses at Montefiore New Rochelle Hospital rallied for safe staffing and a fair contract. They called attention to overcrowding and understaffed facilities, specifically in the maternal child health unit. 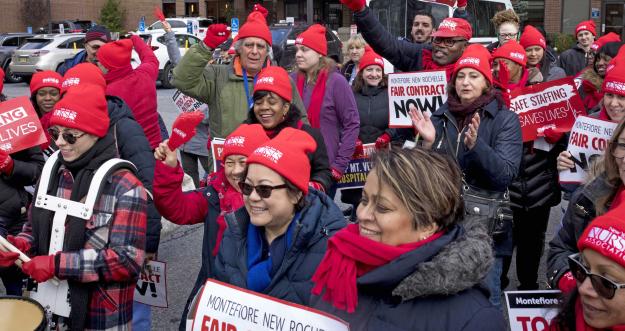 The closure would severely impact residents who rely on the hospital for critical healthcare services, as the 128-year-old hospital is the only hospital in the city of Mount Vernon.

Among the town hall’s attendees was New York State Senator Jamaal Bailey who represents the Bronx and Mount Vernon.

“This decision could have a significant impact on the wait times and resources of other nearby hospitals and could be life threatening for patients who may require immediate care. I hope Montefiore would reconsider its decision to close the hospital,” Bailey said.

Mount Vernon sits in a designated medically underserved area and was only recently withdrawn from Health Professional Shortage Area status—something it could risk regaining if closing inpatient beds pushes affiliated clinical professionals out of the area.

Nurses know from firsthand experience in Queens and Brooklyn how damaging closures can be to the community’s health. They argue that Montefiore is not a financially struggling institution and that it serves patients in a medically underserved community and is vital to meeting community health needs.

Tracy McCook, RN, a NYSNA member who works at Mount Vernon, said, “The threat Montefiore poses in closing Mount Vernon Hospital is terrible. We have joined with community residents and clergy, religious and elected leaders, other unions including 1199SEIU to say to Montefiore: ‘You are taking away a safety net facility and the only hospital in our city. There is no question that the very sick and injured will suffer if the closing takes place.’”

The plan to close Mount Vernon is also attracting attention from federal lawmakers, who have publicly shared their willingness to join the fight to make sure the community does not lose this important facility.

“When I heard Montefiore was planning to close Mount Vernon Hospital and build a new facility on Sandford Boulevard, I immediately spoke with Montefiore President Steve Safyer and expressed my belief that the healthcare needs of the community should be their top priority,” said U.S. Representative Eliot Engel. “I also told Dr. Safyer it would be prudent to convene local stakeholders, including local elected officials, and gather input from members of the Mount Vernon community. Since their announcement, there has been a lot of consternation in Mount Vernon, which is already considered medically underserved.… We need more answers and I hope this event will help facilitate a broader conversation about Montefiore’s plan.”

Nurses are calling for these answers and more, as the community closes ranks behind a demand to keep Montefiore Mount Vernon open and provide a contract at New Rochelle that guarantees quality care for its patients. 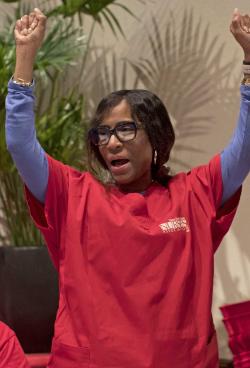 "We have joined with community residents and clergy, religious and elected leaders, other unions including 1199SEIU to say to Montefiore: 'You are taking away a safety-net facility and the only hospital in our city." -Tracy McCook, RN