Over just a few days during the last week of August NYSNA members at three hospitals in the Central and Capital Regions brought months of contract negotiations to a spectacular close, reaching tentative agreements at St. Elizabeth Medical Center in Utica, Samaritan Medical Center in Watertown, and Nathan Littauer Hospital in Gloversville.

Near unanimous ratifications quickly followed, with NYSNA members winning key improvements in staffing as well as wages and benefits.

Upstate New York had never seen anything like it!

The nurses say it was no coincidence that the three came to a resolution in the same week. They attribute their success to a combination of strong unity among nurses within their own hospitals, unprecedented regional solidarity, community engagement on safe staffing issues, and a legal strategy that held the hospitals accountable to complying with federal labor law.

While negotiating independently, members at the three hospitals met at joint Interregionals and steward trainings and coordinated their actions — most recently all three facilities issued September 1 strike notices.

According to Mike Pattison, an RN on the NYSNA Executive Committee at St. Elizabeth, “The coordination with Samaritan and Nathan Littauer was important on two fronts. It showed St. Elizabeth nurses that we aren’t alone in our fight for safe staffing — that it’s a problem all over the state. Plus, it showed management that NYSNA nurses are serious about patient care. Don’t mess with us!” 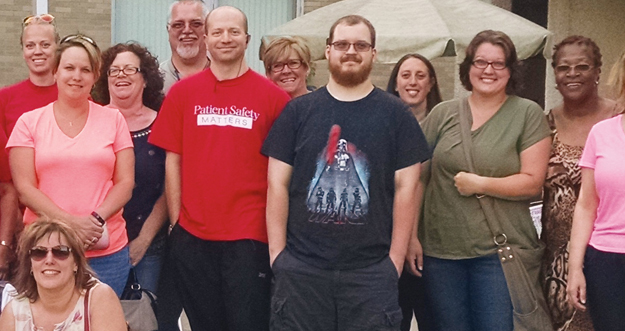 All three contracts include wage gains and maintain health and pension benefits, however, “The biggest issue was always staffing,” according to Deborah LaMora, an RN and LBU Co-chair at Samaritan. Her colleague Jill Schloemer, an RN and Negotiating Committee member, agreed, “From the start, we knew we couldn’t back down on the issue of staffing — for both the safety of our patients and to keep nurses working at the hospital. We know that staffing, along with fair wages and health and pension benefits, is key to improving the hospital’s ability to recruit and retain nursing staff.”

Under the contract, Samaritan agreed to immediately begin recruiting 10 new full-time nurses, purchase and implement a patient classification system that determines staffing based on acuity, and establish Nursing Staffing Committees in each of the hospital’s clinical practice areas. In addition, the hospital will create a Nursing Resource Team for immediate response to any nurse reports of unsafe staffing and establish a Specialty Float Pool.

Nathan Littauer’s LBU President Marion Enright, RN, is proud of the staffing gains achieved at her hospital: “The new contract enacts new rules and guidelines that make huge strides in putting more nurses at the bedside of the patients, including the establishment of a Nurse Resource Team.”

Jessica Culver, an RN at St. Elizabeth is happy to report that her new contract also takes steps toward improving patient safety. “This contract puts the issue front and center and establishes a process for holding the administration accountable to patients and their families as well as the nurses.”

The St. Elizabeth agreement includes hiring 5 new full-time Registered Nurses, establishes new committees in which nurses will have a true voice in staffing, and creates a mechanism for improved response to short staffing.

“Knowing that we were not alone and had friends that had our backs — and that we had theirs — made all of us stronger,” Ms. Enright said. This support was particularly critical following the nurses’ one-day strike and subsequent week-long lockout last January.

“On what I think was the coldest day of the winter this year we had CWA there, we had 1199 there, we had teachers there,” Ms. Enright recounted. “We won our unfair labor practice charges. We got paid for the time we were unfairly locked out. We won discrimination cases. We won intimidation cases. Our victory meant the world to us. It meant that we were not fighting alone.”

According to Mr. Pattison, “In Utica we had a strong, united group inside the hospital from the very beginning, who reached out and pulled patients and the community into the struggle. The Utica Common Council issued resolutions in support of safe staffing and the St. Elizabeth nurses, the Central New York Labor Council lent its support, and lawn signs popped up all over the area calling on the hospital to listen to the nurses.” His colleague Ms. Culver added, “St. Elizabeth, Samaritan and Nathan Littauer all draw from the same labor market. Our persistence and unity really made a difference in the end. Management found that nurses stick together and aren’t afraid to do what’s needed to protect our patients.”

Samaritan nurses enjoyed broad support, as well. “We had a tremendous degree of community support. Assemblywoman Addie Russell (D-116) was with us all the way, from our March informational picket all the way through to our final bargaining session,” said Ms. Schloemer. After the Watertown Daily Times ran an editorial in support of the nurses, the community began to raise a lot of questions about the hospital’s staffing levels. Ms. LaMora said, “I had never seen an editorial from that paper that sided with a union. It shows that people see the conditions at the hospital. They know how long they wait when they call for a nurse and see how run ragged we are.” 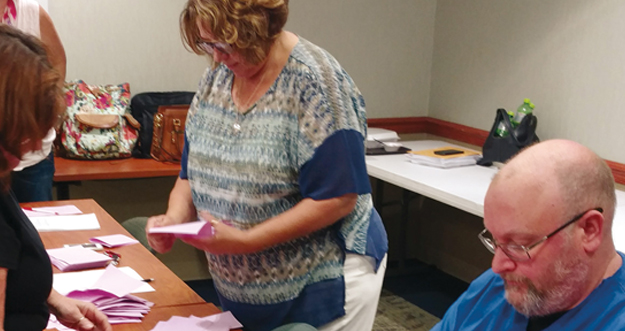 Votes are tallied following the August 31 ratification at Samaritan.

Transparency brought new members into the process: “I’ve been a union rep for 22 years and been involved in bargaining seven contracts. This was the first time that nurses were so directly involved in negotiations. It was empowering to have the opportunity sit at the table and speak directly to management about the dangers of unsafe staffing,” said Ms. LaMora. Her colleague Ms. Schloemer agreed, “When negotiations began, we’d have maybe 3 or 4 nurses who weren’t on the committee coming to bargaining. By the time our last session on August 24 came around, we had over 200 nurses there — more than half of the chapter — and many of them stayed until the wee hours of the morning.”

“Nathan Littauer is a small hospital. By working together with nurses from other hospitals we achieved more than we could have on our own. I’m so proud that we stuck together as a team and all achieved contracts that are good for everyone,” said Renee Blowers, an RN in Nathan Littauer Hospital’s Special Care Unit.

In their contract fights, nurses in the region spurred a new and united movement of communities and caregivers committed to improving health care. “Through this process, we grew stronger and built relationships that will last. Our contracts may be settled but we already have plans for more joint activities and meetings and want to keep up our work together to achieve better, safer care for our patients in the region,” said Ms. Blowers — a sentiment that was echoed by her fellow nurses at all three hospitals.