I was as outraged as anyone to see pictures of attack dogs released by shock troops in North Dakota to “neutralize” Native American protesters fighting to save their water and their nation from the toxic and dangerous effects of a volatile pipeline snaking through their lands. It brought to mind the pictures of police dogs used to attack African-American civil rights protesters in the South that haunted my childhood over 50 years ago. In August, I traveled to North Dakota’s Standing Rock Reservation to show support and solidarity to the tribes gathered there (see page 11, bottom left).

We say this often when we engage in struggles against the minority of powerful men and corporations that appear to be in control of everything in our society — from the air we breathe to the food we eat to the water we drink. Nurses said it when we united around our contract struggles over the past two years, culminating in info-pickets, strike votes, 10-day notices and strikes — all actions that were not nurses’ first choice. We wanted safe staffing, decent benefits, respect on the job and quality healthcare in our communities.

Never forget that it is the employer’s intransigence that pushes us to engage in such actions. But always remember that it is only through organizing and, unfortunately, most often through such “direct action” tactics that we ultimately gain small and large victories. The most recent example is the inspiring three-hospital (St. Elizabeth in Utica, Samaritan in Watertown and Nathan Littauer in Gloversville) strike notices and unified action plans that pushed those greedy employers to settle in the Central Region of the state. 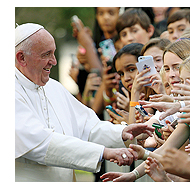 The ongoing abuse of the Westchester Medical Center RNs, working without a signed agreement for five years, the county knowing full well that the Taylor Law prohibits a “legal” strike — is opportunism at its worst. The Catholic Health Services of Long Island (CHSLI) are functioning in direct contradiction of Pope Francis’ comments: “Not paying fairly, not giving a job because you are only looking at how to make a profit, that goes against God.” An attack against one IS an attack against all. All NYSNA members need to stand with these nurses who are only asking for the same things that every one else is asking for.

Public sector, private sector, upstate, downstate, out of state, community hospital, academic teaching center, small local practice, large mega-system — we are all dedicated caregivers trying to practice our craft in an environment that is more and more hostile to us; one that pulls us away from our patients with every new task or mandate that they thrust upon our shoulders.

When we fight against DuPont and other irresponsible corporations who have poisoned our water in Hoosick Falls, so close to our state capital, or demand the permanent cessation of fracking — the process that releases toxins into aquafers, and methane into the atmosphere — or stop the “Bomb Trains” that carry super-volatile Bakken Dakota Oil, we are also caring for our patients. Without clean water, without a safe environment, what will happen to us?

Many individuals and organizations are proud to render support to the First Nations People who have joined together in North Dakota at the Sacred Stone Camp to prevent the desecration of sacred burial sites and the poisoning of clean river water, drinking water — from the same Crude Bakken Oil that inhabited the Bomb Trains against which 1,000 NYSNA members demonstrated in Saratoga last year.

Caregivers of individual patients — or of the planet we all dwell on — deserve the respect inherent in the title: We are Caregivers All. Listen to Us.