This hospital is our second home and we are family! Our bond and perseverance allowed us to fight strong and ultimately achieve a great contract! We look forward to recruiting nurses and welcoming them into our ‘home’ and continuing to make Westchester Medical Center a great place to be not only for us but most importantly for the patients and families.” These are the words of Damayanthy Sujanthan, RN, a neo-natal ICU nurse and one of 1,500 NYSNA members who celebrated a contract ratification on January 4.

Westchester Medical Center (WMC), located in Valhalla, NY, is a public hospital that serves communities in seven counties….seven! Few hospitals in the nation can make such a claim or shoulder that responsibility. The WMC nurses have worked long and hard to achieve a fair contract — to keep quality care in place for the thousands of patients who come through its doors, all the while advocating strongly for a fair deal.

The new contract strengthens their ranks with provisions that better define agency nurses and protect vacation time. The WMC nurses are now among the highest paid RNs in the nation. [See highlights at bottom of article] With the new deal in place, recruitment and retention rates will go up. All the nurses agree: this was key to protecting quality care.

The RN fight at WMC goes back a number of years. A critical juncture came at the end of 2012, after WMC management announced they were reducing RN FTEs.

Jayne Cammisa, RN, NYSNA board member for the Lower Hudson/NJ Region and fulltime release time rep at WMC, has spent close to 30 years at the facility, including in the kidney-liver transplant unit. She recalled vividly the nurses’ decision to launch a POA campaign to express concerns that reduction of RNs could negatively affect working conditions. POA — Protest of Assisgnment — is a NYSNA form that nurses have used to achieve better staffing.

The nurses filed thousands of POAs reflecting staffing issues and concern for the future of the hospital. “We launched an extensive POA campaign,” said Ms. Cammisa. “And it was very effective.” Over time, the hospital returned nurses to the ranks. “Now we have more than 1,200 FTEs and about 250 per diems,” she said.

Other issues endured, however. Wages were not keeping pace. The senior nursing staff became concerned that RNs could be lured away by competitive hospitals.

Unified and determined, the nurses closed ranks. They successfully fought to bring nurses back after the December 2012 layoff and staffing improved.

2013: Jayne Cammisa, RN, holding one of thousands of POAs that WMC nurses filed following RN layoffs, and the
ensuing staffing problems, in late 2012.

‘Solidarity in our ranks was strong’

The nurses kept going, honing their demands and sustaining their ranks. The outlines of a fair contract were considered and reviewed, debated and reconsidered, and outreaches to the community and to elected officials were on-going. The nurses appeared on billboards, dotted communities with lawn signs, and spoke out in local cable television spots.

“Solidarity in our ranks was strong. So was the support of other unions and elected officials,” said Ms. Cammisa.

WMC nurses, other NYSNA member support, the presence of other unions, community advocates and elected officials combined to bring the matter to a head on December 7, 2016. That day saw an outpouring of hundreds outside the WMC campus, linking arms, chanting and voicing demands. The demonstration was a powerful reminder of the unrelenting determination of the nurses and their supporters. 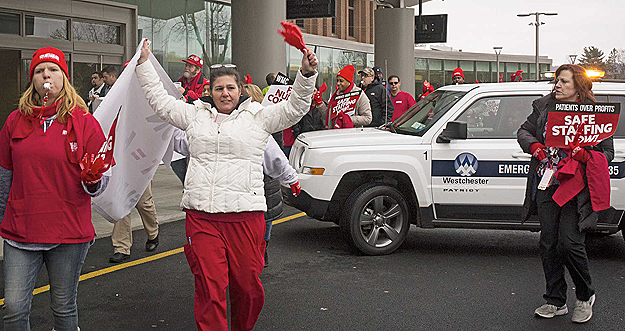 2016: On Dec. 7, NYSNA WMC nurses carried their message to the main entrance to ensure that it was seen by the hospital’s administration.

WMC nurses were joined that day by NYSNA members from hospitals in the Bronx, Manhattan, Staten Island, Poughkeepsie, Long Island and as far away as Shore Medical Center in Southern New Jersey.

Communication workers, teachers, fire fighters, CIR doctors, and 1199SEIU members were there, too.

All came in solidarity and in recognition of the significance of the WMC to the hundreds of communities it served across the region.

“WMC serves three and a half million people,” NYSNA Second Vice President Anthony Ciampa, an RN at New York-Presbyterian, told all gathered. “Justice for the community means it has access to quality care. Justice for nurses means a fair contract!”

“I’ve been here 31 years. Our goal is to get a fair and reasonable contract for the nurses who will
be here long after I’m gone—just like those who came before me have done for me,” said Jack Mace, RN and Grievance Co-Chair at WMC.

“Ultimately, our role is to mentor the young nurses,” said Claire Maggio, RN and Acting LBU “and provide them with the skillset to not only take care of their patients but to take care of themselves—both emotionally, mentally and physically.”

Assemblywoman Shelley Mayer riled the crowd by encouraging WMC to return to bargaining: “Step it up, WMC! Make it happen! We’re not waiting any longer!”

The final push and ratification

Within days negotiations resumed and the teams met in focused sessions. A temporary agreement was reached late on Monday, December 12. Informational sessions were held over the Christmas holiday, voting on January 3 and 4, and ratification — by an overwhelming majority — was announced the evening of January 4. It was a major victory.

Roshan Cherian, an RN with more than a decade at WMC in behavioral health, said the contract provides an “excellent wage.” She is the only source of health coverage for her family, so the agreement on benefits was critical to her. But she reiterated what many WMC nurses have said: the fundamental effect of wages under the new contract will be on recruitment and retention. “I expect the outflow of RNs to stop with this new contract,” she said. That’s critical, all agree.

“We can provide the highest level of care to our patients, many of whom are among the sickest in the nation,” said Wilma Wynter, RN, a member of the nurses’ negotiating committee and 23-year WMC veteran.

“We’re optimistic that with this contract, young nurses will come to see WMC as an excellent place to work and enjoy a long, fulfilling career,” said David Long, RN, a 15-year veteran of the coronary care ICU. “We had a long road to reach this agreement, but now look forward to working with the administration to continue WMC’s tradition of nursing excellence for our Hudson Valley patients and community.”

“This is a very big win for our nurses and the many communities we serve,” said Ms. Cammisa. “The contract, which will enable WMC to recruit and retain RNs, gives us the respect we deserve. Fundamentally, this fight was about respecting our nurses.” 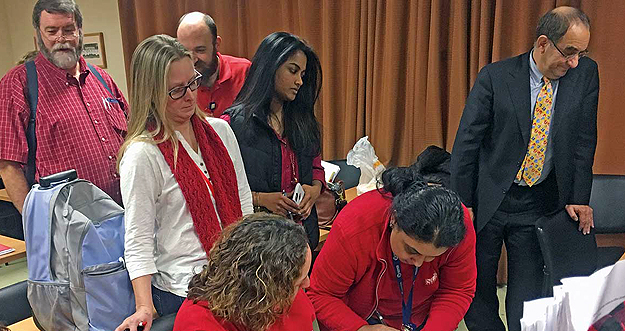