The April 13 Albany Medical Center (AMC) win is still ringing, resonating in the capital and throughout the state and beyond. Registered nurses voted by a strong majority to join NYSNA and put the power of the union to work for a fair contract, for a real say in working conditions — foremost safe staffing — and for respect. Their patient advocacy for 2,200 members will be enhanced immeasurably, with patients, families and the communities they care for sharing in the win.

The win brought together members, community support and a committed NYSNA organizing team.

In the face of strident anti-union campaigning across the country (see Special Edition, pp. 7-10), this victory was all the more sweet.

Kathy Whalen, RN, and Albany Medical Center have a long and intimate relationship. Kathy was born at the hospital and started working there before she was 20. Her tenure at the hospital extends to almost 38 years. For a good number of those years Kathy worked in the NICU, bringing her professional expertise to the most vulnerable newborns.

“I was excited when I learned of the unionizing efforts,” said Whalen. “After attending my first meeting, I found many of us had similar concerns with the direction of our practice.”

What were those concerns? Staffing issues on many units were on the forefront of RN concerns. Also raised, according to Whalen, was the issue of unit-to-unit equities. Training young RNs only to have them leave for better jobs —  the inability of AMC management to keep them — was a sore subject. Generally, Whalen said, it came down to doing more with less.

A strong sense of intimidation by management served to put off nurses like Whalen. She was especially offended by what she saw as heavy-handed efforts by hospital management to threaten Filipino nurses on staff. For Whalen, fellow nurses from the Philippines are friends of many years and she felt heartbroken for them during the campaign. On March 29, Governor Andrew Cuomo directed the Department of Labor to “launch an immediate investigation into the allegations of threatening and coercive behavior at Albany Med,” according to his press release.

“This was a time when we came together and were able to share our concerns and experiences,” said Whalen. “We wouldn’t have been able to do so had it not been for some RN’s reaching out to NYSNA. The effort gained momentum steadily.”

Albany Med nurses now join NYSNA members in Schenectady and Gloversville, the North Country and the Hudson Valley, as the reach of the union grows in Upstate New York.

Social media made a difference

NYSNA’s organizing effort was underscored by a social media campaign that allowed the 2,200 nurses — on different shifts and varying units — to effectively get to know and speak to each other through a digital platform. Whalen and others complimented the effectiveness of this outstanding campaign.

Social media posts highlighted RNs like Chris Lee who wrote, “We treat our patients with respect and compassion; we deserve to be treated the same way.” And a post came from Lisa Eberhardt, RN: “I want a union at AMC so that my patients have the safest and highest quality care.” Mike Fitzsimmons, RN, said “We had an organizing drive at AMC 17 years ago. What’s different this time is we’re very well prepared to stand up for our rights.”

“Congratulations to the registered nurses of Albany Med for standing up for their rights to organize and fight for stronger benefits, wages and staffing schedules — they will be stronger for it,” wrote Governor Cuomo in the aftermath of the union vote. “New York is a union state, and we believe in the power of organized labor to fight for fairness, decency and respect.” (See sidebar for a chronology of the governor’s statements.)

“I was pleased to hear that someone was taking our concerns seriously — the issues and allegations surrounding behavior used by management to discourage union talk between coworkers,” said Whalen. “And it wasn’t just anybody, it was Governor Cuomo.”

The 42,000 members of NYSNA offer a heartfelt welcome to our new members. The union makes us strong and you make our union stronger. Solidarity! 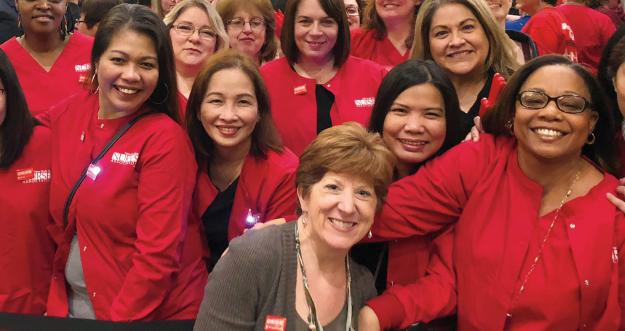 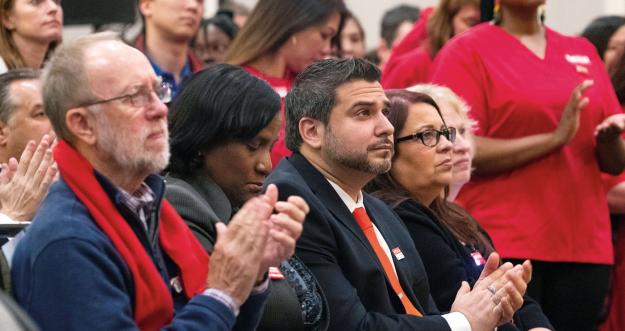 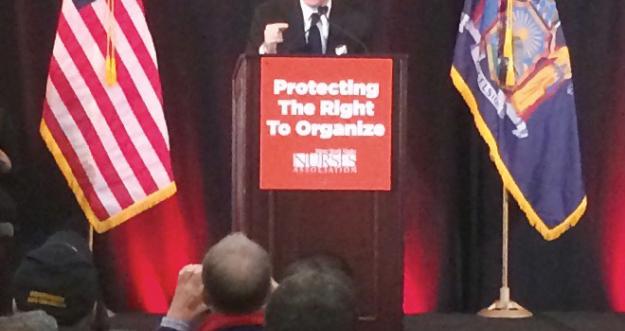 13 AMC nurses holding authorization cards signed by a supermajority of their colleagues at the National Labor Relations Board.

13 Nurses came together from every department to form an organizing committee.

13 "New York is a union state and we have zero tolerance for any attempts to illegally interfere in the fundamental right to join a union. At a time when organized labor is under attack, New York is stepping up for our union brothers and sisters and those seeking to organize–especially the nurses who serve our sick and elderly at hospitals across the state."