More than one in four New Yorkers relies on Medicaid. It is the backbone of healthcare in the state.

Elected officials are proposing to balance the New York State budget through cutting state funding to Medicaid by $2.5 billion, which would be a loss of over $5 billion due to the loss of matching funds from the federal government. A new Medicaid Redesign Team (MRT) has been formed to examine the best way to save costs on Medicaid. 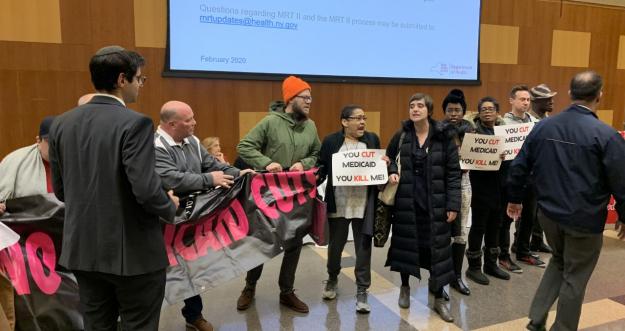 On Friday, February 14, with less than 24-hour notice, the MRT announced a public hearing in New York City. At the beginning of the hearing, 20 demonstrators led by Anthony Feliciano of the Commission on the Public’s Health System, spoke out with sharp objections regarding insufficient notice of the hearing. Protesters called out the MRT’s likely strategy of limiting public participation and public attention to draconian Medicaid cuts, and were escorted out of the meeting shouting “This is a sham!”

NYSNA’s position is that while some cost savings could be found in reforming the Medicaid program, drastic cuts to Medicaid would hurt our most vulnerable patients and hospital systems. New York’s elected officials must also find revenue solutions for the budget shortfall.

“NYSNA rejects that the only option is cost cutting,” testified NYSNA member Flandersia Jones, RN, from BronxCare. Her impassioned testimony before members of the MRT called for “raising new revenue” and to “stop subsidizing big profitable private hospitals.”

Jones concluded, “We will continue to fight to protect funding streams to safety net providers.”

About 25 others testified, including disabled and elderly patients, and family and professional caregivers.

Stay tuned for more opportunities to advocate for your patients and for a fair state budget.